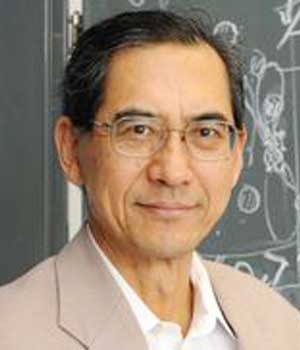 
Toshiki Tajima received his B.S. from the University of Tokyo in 1971 and his Ph.D. from the University of California, Irvine in 1975. Four years later, together with John Dawson, Dr. Tajima invented the laser  wakefield acceleration (LWFA), that accelerates particles to high energies in a very compact way. The applications of this experimentally verified technology are still emerging. Compelling astrophysical evidence for LWFA can be found in gamma-ray bursts; additionally, LWFA allows for the compact generation of high-energy electrons, ions, and x-rays on ultrafast (femto- to atto- and now zepto-second) time scales. Dr. Tajima further proposed LWFA in nanoporous solid media that is capable of delivering TeV energies on a chip. He also discovered a mechanism in which the wakefield mechanism is responsible for the highest cosmic rays (beyond 1020 eV). Alongside these developments, Dr. Tajima also spearheaded the development of High Field Science. Recent applications of this new field include ultrafast radiolysis, compact cancer therapy (such as intraoperative radiation therapy and hadron therapy), as well as compact THz, x-ray, and gamma ray sources. His leadership role in this field includes the UC, Irvine Chairmanship in Extreme Light Infrastructure Scientific Advisory Committee. Dr. Tajima is the recipient of a Chandrasekhar Prize, an Enrico Fermi Prize, an Einstein Professorship at the Chinese Academy of Sciences, the Blaise Pascal Chair, and a Nishina Memorial Prize. He is a member of the Russian Academy of Science, and is a fellow of the American Physical Society, among several other international professional societies.