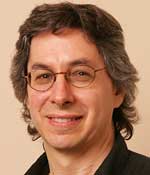 
"For the development of methods for probing and controlling ultrafast dynamics in polyatomic molecules, including time-resolved photoelectron spectroscopy and imaging, strong field molecular ionization, and dynamic Stark quantum control."


Albert Stolow, Ph.D., was named in 2014 as the Canada Research Chair in Molecular Photonics at the University of Ottawa (Ont.) where he is also a professor of chemistry and physics, and a member of the Molecular Photonics Group at the National Research Council (NRC) Canada. Dr. Stolow received his B.Sc. in physics and chemistry from Queen’s University (Toronto, Ont.) in 1982 and his Ph.D. from the University of Toronto in 1988, studying under Nobel Laureate John C. Polanyi, Ph.D. Stolow was an Natural Sciences and Engineering Research Council Fellow at the University of California, Berkeley from 1989 to 1992, during which time he worked with Nobel Laureate, Yuan T. Lee Ph.D In 1992, Dr. Stolow joined the NRC where he went on to found the Molecular Photonics Group. His research interests combine two themes within the NRC: molecular spectroscopy, deriving from the legacy of Gerhard Herzberg, and ultrafast laser physics, led by Paul B. Corkum, Ph.D. At NRC, Dr. Stolow established laboratories and research programs for the study of ultrafast molecular dynamics and quantum control, strong field attosecond physics of polyatomic molecules, and coherent nonlinear Raman microscopy. Dr. Stolow is a fellow of both the American Physical Society (APS) and the Optical Society of America, and has won several national prizes including the Queen Elizabeth II Diamond Jubilee Medal and the Keith Laidler Award of the Canadian Society for Chemistry. Dr. Stolow is member-at-large of the Executive Committee of the Division of Laser Science, APS.