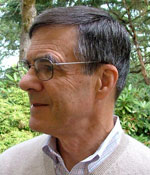 
"For work in perturbative Quantum Chromodynamics, including applications to problems pivotal to the interpretation of high energy particle collisions."


Davison E. Soper graduated from Amherst College in 1965 and received his Ph.D. from Stanford University in 1971. He taught at Princeton University from 1971 to 1977. He has been at the University of Oregon since 1977. He was Head of the Physics Department from 2004 to 2007. Soper's thesis work, with J. Kogut and directed by J. Bjorken, concerned -plane quantum field theory. He worked with J. Collins on the definition of parton distribution functions and with Collins and G. Sterman on summing logarithmically enhanced contributions to observables and on the factorization property that enables one to make reliable predictions for hadron colliders. Z. Kunszt and S. Ellis, and Soper calculated cross sections to make jets of hadrons in hadron- hadron collisions, using matrix elements from R. K. Ellis and J. Sexton. Soper's most recent work, with Zoltan Nagy, concerns the parton showers produced in high energy collisions. Soper is a member of the CTEQ collaboration and was its co-spokesperson from 2001 to 2004. He has served as a Divisional Associate Editor of Physical Review Letters and as a member of the Editorial Board of Physical Review D. He is a member of the APS and is a Fellow of the AAAS.