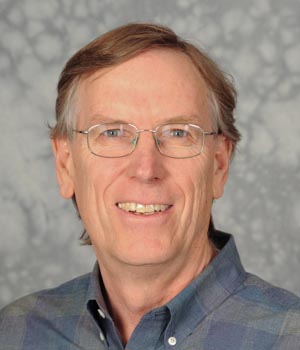 
"For seminal developments in magnetic force microscopy leading to significant measurement advancements, including the detection of a single electron spin and nuclear magnetic resonance imaging at the nanometer scale."


Daniel Rugar is a Distinguished Research Staff Member and Manager of Quantum Devices and Measurements in the IBM Research Division. He began his scientific career in the field of scanning microscopy where, as a Ph.D. student at Stanford, he developed gigahertz-frequency acoustic microscopes operating in superfluid helium. After joining IBM in 1984, he contributed to the development of non-contact atomic force microscopy, especially for imaging magnetic materials. His group’s early work on magnetic force microscopy helped establish this technique as a standard tool for magnetic materials research and spintronics. Pushing the limits of mechanical force detection, his group’s achievement of attonewton sensitivity enabled the measurement of electron and nuclear spin resonance at the nanometer scale. This work culminated in the detection of an individual electron spin and the demonstration of 3D nuclear magnetic resonance imaging (MRI) with better than 10 nm spatial resolution. Rugar’s group has also investigated the use of NV-centers in diamond for nanoscale MRI and is currently focused on improving the performance of superconducting qubits. Dr. Rugar graduated from Pomona College in 1975 and received a Ph.D. in Applied Physics from Stanford University in 1982. He has served as a Distinguished Lecturer of the IEEE Magnetic Society and was co-recipient of the Laukien Prize and the Cozzarelli Prize for the development of magnetic resonance force microscopy. He is a Fellow of the APS, AAAS and IEEE.