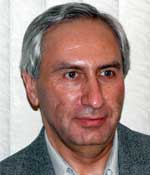 
"For his leadership in the field of structure and dynamics of polymer liquids, interfaces and gels"


Michael Rubinstein received B.S. with honors in physics from Caltech in 1979 and Ph.D. in physics from Harvard University in 1983 specializing in soft condensed matter theory.

Between 1983 and 1985 he was a post-doctoral fellow at AT&T Bell Laboratories in Murray Hill, NJ where he started his research in polymer physics.

In 1985 he joined Research Laboratories of Eastman Kodak Company in Rochester, NY where he worked for ten years in different areas of polymer theory. In 1987 he received C.E.K. Mees Award In Recognition of Excellence in Scientific Research and Reporting. In 1994 he was Juliot Curie Visiting Professor at ESPCI in Paris.

In 1995 he moved to the University of North Carolina at Chapel Hill where he is currently a John P. Barker Distinguished Professor in the Department of Chemistry and in the Curriculum of Applied Sciences and Engineering. He is also a member of the Program in Molecular and Cellular Biophysics and of the Institute for Advanced Materials, Nanoscience and Technology. In 1998 he was Visiting Professor at College de France.