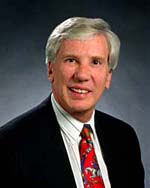 
"For his leadership roles as Director of the Sandia National Laboratories and as Head of the US Delegation to the US/USSR arms control talks in Geneva, and for his pioneering contributions to the development of high explosives lasers, e-beam initiated chemical lasers, and molecular laser isotope separation methods."

He is a member since 1991 of the Strategic Advisory Group for the Commander, U.S. Strategic Command. Since 1998, he has served on Department of Defenses Threat Reduction Advisory Committee.

Appointed by Presidents Ronald Reagan and George Bush, Ambassador Robinson served as Chief Negotiator (1988-90) and headed the U.S. Delegation to the US/USSR Nuclear Testing Talks in Geneva, which produced: Protocols to the Threshold Test Ban Treaty and the Peaceful Nuclear Explosions Treaty, ratified unanimously by the Senate and in force between the US/Commonwealth of Independent States

He was Senior Vice President, Principal Scientist, and Board Member of Ebasco Services Inc., a N.Y.-based engineering/construction firm. He led defense programs at Los Alamos National Laboratory and has testified over 60 times before Congress. He was elected to the National Academy of Engineering.

Robinson received the Outstanding Public Service Medal from the Joint Chiefs of Staff. He has a B.S. (Physics) and honorary doctorate from Christian Brothers College, and a Ph.D. (Physics) from Florida State University.