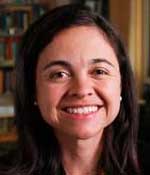 "For her pioneering research on developing fundamental understanding and control of novel quantum systems and finding applications for a wide range of scientific fields including quantum metrology and emerging interface between AMO, condensed matter, and quantum information science."


Ana Maria Rey was born in Bogotá, Colombia. She obtained her bachelor degree in physics in 1999 from the Universidad de los Andes, Bogota. She pursued her graduate studies at the University of Maryland at College Park and NIST-Gaithersburg and received a PhD degree in 2004. Her doctoral thesis entitled "Ultracold bosonic atoms loaded in optical lattices" was recognized by the American Physical Society with the best doctoral AMO thesis award in 2005 and by the Fundacion Alejandro Angel Escobar with the Natural Sciences Prize in 2007. Rey was granted an ITAMP postdoctoral Fellowship from 2005 to 2008 and joined JILA, NIST and the University of Colorado at Boulder faculty in 2008. She is currently a JILA fellow and a research associate professor in the physics department.

Rey research is on how to control and manipulate ultra-cold atoms, molecules and trapped ions for use as quantum simulators of solid state materials and for entanglement generation, quantum information and precision measurements. She has initiated a new direction of studies that involves the use of alkaline earth atoms.

Rey is a member of the American Physical Society. She was selected as APS Woman Physicist of the Month in 2012, and received in 2013 a HENAAC Award and a MacArthur fellowship.