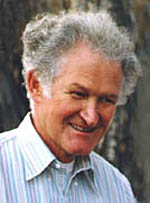 
"For pioneering contributions to nanoscale measurement science through their leadership in the development of a range of nanoscale force microscopes that have had major impact in many areas of physics."