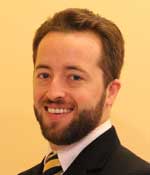 
"For his outstanding contributions to the search for neutrinoless double beta decay of 130Te, and setting a new limit on its decay half-life, at the Cryogenic Underground Observatory for Rare Events in Gran Sasso, Italy."


Jonathan L. Ouellet received his B.A. in physics in 2008 and later his Ph.D. in 2015, both from the University of California, Berkeley. His research focuses on rare event searches as a probe for physics beyond the Standard Model. He did his thesis work as part of the CUORE collaboration, searching for neutrinoless double-beta decay with bolometric detectors. He is currently a postdoctoral researcher at the Massachusetts Institute of Technology where he continues his work on CUORE. He has expanded his focus to include liquid scintillator-based technologies as well, joining the KamLAND-Zen experiment and the NuDot R&D effort. He has also recently begun working on a new cryogenic-based axion dark matter search at MIT, called ABRACADABRA.