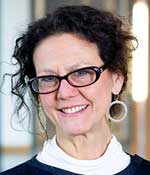 
"For outstanding contributions to the theoretical understanding of polymers, and the effects of electrostatic interactions on their structure and properties."


Monica Olvera de la Cruz, Ph.D., obtained her B.A. in physics from the National Autonomous University of Mexico (Mexico City) in 1981, and her Ph.D. in physics from the University of Cambridge (U.K.) in 1985. She was a guest scientist from 1985 to 1986 at the National Institute of Standards and Technology in Gaithersburg, Md. Dr. Olvera de la Cruz joined Northwestern University (Evanston, Ill.) in 1986, where she is the Lawyer Taylor Professor of Materials Science & Engineering, a professor of chemistry, and of chemical & biological engineering. Dr. Olvera de la Cruz directs the university’s Center for Computation and Theory of Soft Materials and co-directs f its Center for Bio-Inspired Energy Science. From 2006-2013 she directed Northwestern’s Materials Research Center. From 1995 to 1997, Dr. Olvera de la Cruz was a staff scientist in the French Alternative Energies and Atomic Energy Commission in Saclay, France, where she also held visiting scientist positions in 1993 and in 2003. Dr. Olvera de la Cruz has developed theoretical models to determine the thermodynamics, statistics, and dynamics of macromolecules in complex environments including multicomponent solutions of heterogeneous synthetic and biological molecules, and molecular electrolytes. Dr. Olvera de la Cruz was the 2015-2016 Miller Institute Visiting Professor; was elected into the National Academy of Sciences (NAS) in 2012; became a fellow of the American Academy of Arts and Sciences in 2010; and received a National Security Science and Engineering Faculty Fellowship (DoD) in 2010. Dr. Olvera de la Cruz was awarded the 2007 NAS Cozzarelli Prize and won the National Science Foundation’s Presidential Young Investigator Award from 1990 through 1995. She earned a 1990-92 Alfred P. Sloan Fellowship and a David and Lucile Packard Fellowship in Science and Engineering from 1989 to 1994. Dr. Olvera de la Cruz is a fellow of the American Physical Society, and a member of the DOD’s Basic Energy Sciences Advisory Committee.