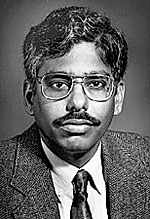 
"For outstanding theoretical contributions to the fundamental understanding of the statistics of isolated chains, chain dynamics, critical phenomena and polymer self-assembly."

Dr. Muthukumar's research addresses the statistical mechanics of synthetic and natural polymers. Specifically, he works on t he structure, recognition, dynamics and transport of polymer molecules, and self-assembly and kinetics of multi-domain polymer assemblies.

Dr. Muthukumar has received an Alfred p. Sloan fellowship, the APS Dillon Medal, the Maurice Huggins Award of Gordon Conferences, and the Chancellor's Medal of the University of Massachusetts as a University Distinguished Lecturer. He is a Fellow of the American Physical Society,, a member of the American Chemical Society, and currently is a Divisional Associate Editor of the Physical Review Letters.