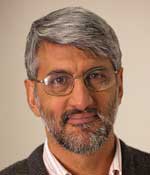 
"For contributions to the precision measurement of atomic properties, and sustained, inspirational mentorship of undergraduate researchers."


Protik (Tiku) K. Majumder, Ph.D., earned his B.S. from Yale University (New Haven, Conn.) in 1982, and his Ph.D. in atomic physics from Harvard University (Cambridge, Mass.) in 1989. He was a postdoctoral fellow at the University of Washington (Seattle) where he pursued experimental tests of fundamental physics with atoms. At Williams College (Williamstown, Mass.) since 1994, Dr. Majumder and his students have pursued a series of high-precision atomic structure measurements in heavy atoms of particular relevance to these fundamental tests. These laser spectroscopy measurements of hyperfine structure, polarizabilities, and transition amplitudes have provided tests of ongoing ab initio atomic structure calculations in these systems. More than 20 undergraduates from his group have been co-authors on journal publications. At Williams, Dr. Majumder teaches throughout the undergraduate curriculum. He has supervised more than thirty undergraduate thesis students, including two American Physical Society (APS) Apker Award winners and one finalist, and currently serves as the college’s science center director. Dr. Majumder’s research has been supported by grants from the Research Corporation for Science Advancement, the National Institute of Standards and Technology Precision Measurement Grants program, and, for the past twenty years, from the National Science Foundation’s Research in Undergraduate Institutions program. Dr. Majumder was elected as an APS fellow in 2007.