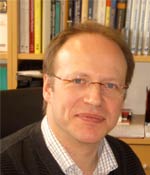 
"For establishing numerical simulation as a tool on equal footing with experiment and theory in the field of polymer science, as exemplified by seminal simulations of entangled polymer melt dynamics."


Kurt Kremer received his Diploma in physics in 1980 and the PhD in 1983 under the supervision of K. Binder from the University of Cologne, Germany. After being a postdoc at Exxon Research and Engineering he moved to the University of Mainz and then 1988 as senior scientific staff to the Research Center Jülich. In 1995 after a short stay at Bayer he became director at the Max-Planck-Institute for Polymer Research in Mainz, heading the theory department and 1996 adjunct Professor of Physics at the University of Mainz.During his career he spent several extended visits at Exxon Research, UC California and University of Minnesota. He has been Divisional Associate Editor of Physical Review Letters from 1998-2000 and serves on a number of editorial and supervisory committees. He was honored with several named lecture ships (Nakamura Lecture UCSB, Withby Lecture Akron, G.T. Piercy Professorship, Minneapolis) and is Fellow of the APS (2006). In 1992 he received the Walter Schottky Preis of the German Physical Society. His research focuses on soft matter physics, especially based on computer simulation methods, where he also is strongly involved in various aspects of method development.