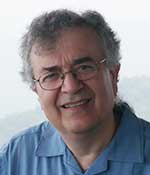 "For seminal contributions to the discovery of new families of thermoelectric materials with the highest known figure of merit."