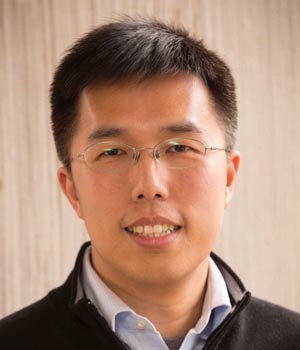 Liang Jiang
The University of Chicago


"For substantial contributions to the field of theoretical quantum information science, with emphasis on exploiting novel error correction strategies to enhance performance in a manner compatible with state-of-the-art experimental platforms, and for helping establish new foundations for fault-tolerant and practical quantum communication, computing, and sensing."


Liang Jiang received his BS from Caltech in 2004 and PhD from Harvard University in 2009. He then worked as a Sherman Fairchild postdoctoral fellow at Caltech. In 2012, Liang joined the faculty of Yale University as an assistant professor and later as an associate professor of Applied Physics. In 2019, Liang moved to his current position as a professor at the University of Chicago Pritzker School of Molecular Engineering. Liang is also an Amazon Scholar on Quantum Computing. Liang theoretically investigates quantum systems and explores various quantum applications, such as quantum sensing, quantum transduction, quantum communication, and quantum computation. His research focuses on using quantum control and error correction to protect quantum information from decoherence to realize robust quantum information processing. He was awarded the Alfred P. Sloan Research Fellowship, and the David and Lucile Packard Foundation Fellowship in 2013.