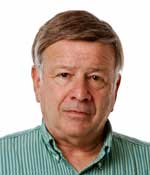 
Gerald Guralnik received his BS Degree from MIT in 1958 and his PhD degree from Harvard in 1964.   He went to Imperial college in London as a postdoctoral fellow supported by the National Science foundation (1964-1965) and then became a postdoctoral fellow at the University of Rochester. In the fall of  1967 he became an assistant Professor at Brown University  and became a full Professor in 1973. He frequently visited Imperial college and Los Alamos National Laboratory where he was a staff member from 1985 to 1987. While at Los Alamos, he did extensive work on the development and application of computational methods for lattice QCD. His primary interests are currently in quantum field theory and general relativity. He is particularly interested in the phase structure and the full solution set of quantum field theory analyzed both abstractly and through numerical techniques. He was a Sloan fellow and is a fellow of the APS.