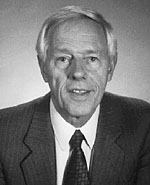 
"For fundamental contributions to the physics of adhesion and fracture of elastomers."


Alan N. Gent is now Professor Emeritus of Polymer Physics and Polymer Engineering at The University of Akron, where he has been since 1961, and Scientific Advisor to The Goodyear Tire and Rubber Company. From 1949 to 1961 he was a research physicist at the British (now Malaysian) Rubber Producers' Research Association.

He holds a B.Sc. degree in Physics and Mathematics (1946, 1949), and a Ph.D in science (1955) from the University of London. His main research interests are in the mechanics of deformation and fracture of rubber and plastics. He is a past Chair of the Division of High Polymer Physics of the American Physical Society (1977), the past President of the Adhesion Society (1978-80), and past President of the Society of Rheology (1981-83). He has chaired four Gordon Research Conferences: Elastomers (1966), Cellular Materials (1069), Adhesion (1976), and Composites (1991).