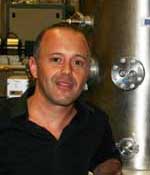 
"For greater understanding of energetic particle transport in tokamaks through collaborative research."


Dr. Garcia Munoz obtained his Ph.D. in Physics at the Ludwig-Maximilians-University in Munich in 2006. Following his thesis work, he was a post doctoral researcher at IPP and, after 2 years, became a research scientist on a permanent position. In 2012 he began teaching at the University of Seville, Spain. He is involved in numerous collaborations on fast-ion physics in the field which comprise, besides the DIII-D collaboration, work on fast-ion detectors in JET, KSTAR, MAST-U and TJ-II, as well as modelling of fast-ion behaviour with several plasma physics theory groups.