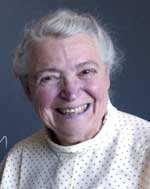 
"For pioneering contributions to the understanding of electronic properties of materials, especially novel forms of carbon."


Mildred Dresselhaus has an A.B. from Hunter College (1951) and a Ph.D. from the University of Chicago (1958). After an NSF postdoctoral fellowship at Cornell University, she became a staff member at the MIT Lincoln Laboratory (1960). In 1968 she became an MIT faculty member and in 1985 an Institute Professor.