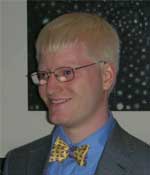 
Christopher Chudzicki received his B.A. in physics and mathematics from Williams College, where he graduated valedictorian. In his senior thesis research, Chris studied theoretical aspects of quantum state transfer on qubit and oscillator networks with Professor Frederich W. Strauch, with an eye towards implementation in the realm of superconducting quantum circuits. While previous studies had focused on transferring only one quantum state at a time, their research was on parallel quantum state transfer: transferring several quantum states between different nodes of the same network at the same time. They discovered that high-fidelity, in fact, perfect, parallel state transfer is possible on hypercube oscillator networks. Chris has also conducted research at Williams with Professor William K. Wootters investigating the link between the bosonic character of a composite particle and the entanglement of its constituents. He is now pursuing his Ph.D. in theoretical Physics at the Massachusetts Institute of Technology, where he holds a fellowship in the Interdisciplinary Quantum Information Science and Engineering program.