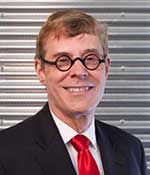 
"For fundamental contributions to the field of nonlinear optics, including the development of approaches for controlling the velocity of light, of quantum imaging methods, and of composite nonlinear optical materials."