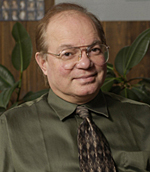 
"For his broad, sustained, and insightful contributions to elucidating the structure of the nucleon, using a wide variety of probes, tools and methods at many Laboratories."


Bodek received his B.S. in physics in 1968 and his Ph.D. in physics in 1972 from the Massachusetts Institute of Technology. He was a postdoctoral associate at MIT and a Robert E. Millikan Fellow at Caltech. Bodek joined the University of Rochester as an Assistant Professor of Physics in 1977, where he has remained apart from a stint as a project director at the Department of Energy (1990-91). He has been serving as Chair of the Department of Physics and Astronomy since 1999. He has been awarded an Alfred P. Sloan Fellowship, an NSF-JSPS Fellowship, and has been elected a Fellow of the American Physical Society.

Bodek has done extensive research in collider physics including the physics of of W', Z's, dileptons, W Asymmetry, and quark-lepton compositenes. His research includes neutrino physics and neutrino oscillations, deep inelastic scattering and nucleon structure, and quark distributions in nuclei He is also currently involved in the development of scintillating tile/optical-fiber electromagnetic and hadronic calorimeters. In previous years, he has also been involved in e+-e- experiments and was responsible for the construction of the muon detector for the AMY experiment at TRISTAN/KEK in Japan. He played a leading role in the construction of the CCFR and NuTeV detectors and in the construction of the End-Station A/NPAS detectors at SLAC. Bodek has served as spokesperson of Fermilab Experiment E595 (hadronic production of charm), SLAC experiment E140 and Jefferson Laboratory experiment E03-110.

Bodek's research group is currently involved in the CDF, CMS, and Jefferson Lab E03-110 experiments, and in analysis of the CCFR/NuTeV experiments. In CDF at Fermilab he has been in charge of the construction of the plug upgrade hadron calorimeter. Bodek has also been leading an experimental and phenomenological group to investigate the structure of nucleons and nuclei in electron-nucleon and neutrino-nucleon experiments.

Bodek is also highly active in physics education and outreach activities, and in efforts to increase the number of under-represented groups in science and engineering.. He has co-directed the NSF funded Research Experience for Undergraduates (REU) and Research Experience for High School Teachers (RET) programs at Rochester, the Pre-College Experience in Physics (PREP) program for high school girls, the GAANN Department of Education program for graduate students, and has also been involved in the PARTICLE program for high school teachers. In 1998 he shared the University of Rochester Goergen Award for Distinguished Contribution to Undergraduate Learning (with Priscilla Auchincloss, Lynne H. Orr, and Connie Jones) for the Women in Science and Engineering (WISE) Program.