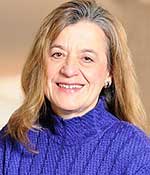 
"For imaginative and insightful use of theory to understand multi-component polymeric systems."


Anna C. Balazs received her B.A. in physics from Bryn Mawr College in 1975 and her Ph.D. in materials science from the Massachusetts Institute of Technology (MIT) in 1981. She is the Distinguished Professor of Chemical Engineering and the Robert von der Luft Professor at the University of Pittsburgh. Her research involves developing theoretical and computational models to capture the behavior of polymeric materials, nanocomposites and multi-component fluids. Balazs is a Fellow of the American Physical Society, the Royal Society of Chemistry, and the Materials Research Society. She was a Visiting Fellow at Corpus Christi College, Oxford University. She has served on a number of editorial boards, including: Macromolecules, Langmuir, Accounts of Chemical Research, and Soft Matter. She was Chair of the American Physical Society Division of Polymer Physics in 1999-2000. She received a Special Creativity Award from the National Science Foundation. In 2003, she received the Maurice Huggins Memorial Award of the Gordon Research Conference for outstanding contributions to Polymer Science. Recently, she received the 2015 Royal Society of Chemistry S F Boys-A Rahman Award, the 2014 American Chemical Society Langmuir Lecture Award and the 2013 Mines Medal from the South Dakota School of Mines.