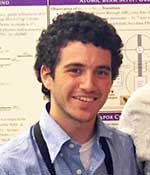 
Benjamin Augenbraun received his B.A. in physics from Williams College in 2015. He worked with Prof. WIlliam Wootters on a theoretical project in quatum chaos and then joined Prof. Tiku Majumder's atomic physics group. In the Majumder lab, Augenbraun worked implemented a two-tone frequency modulation shceme, resulting in a precision measurement of the scalar polarizability of an excited state (6p1/2) of atomic indium with an uncertainty of approximately 1%. His senior honors thesis project used laser spectroscopy to measure the shift in spectral lines induced by application of large DC electric fields (up to 20 kV/cm) to the atoms. Augenbraun was awarded a Barry M. Goldwater Scholarship in 2014 and the Howard P. Stabler Prize in Physics in 2015. Augenbraun is currently a first-year PhD student at Harvard University. Ultimately, he hopes to continue his research career in an environment where he can also pursue his passion for teaching.