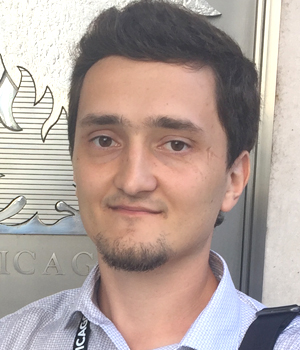 
Sergey became interested in particle accelerators when visiting Fermilab as a summer student in 2011. After completing his Master’s degree in Applied Physics and Mathematics at Moscow Institute of Physics and Technology in Moscow, Russia in 2012 he moved to Chicago to pursue his Ph.D. at the University of Chicago. He did the thesis research at Fermilab, where he studied beam dynamics in the Integrable Optics Test Accelerator (IOTA) and later in the Recycler ring. He investigated the fast transverse instability observed in the Fermilab Recycler, discovered the cause of the instability – the build-up of electron cloud in the Recycler’s combined function magnets, and showed that trapping of cloud electrons by magnetic field plays a crucial role this process. He also participated in the design of IOTA and performed numerical simulations of single-particle dynamics in its nonlinear focusing lattice. After receiving his Ph.D. in 2017, Sergey became a fellow at CERN. He is currently working on coherent beam stability aspects of the High Luminosity upgrade of the LHC.