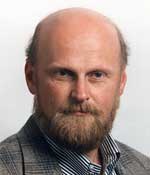 Paul B. Wiegmann
The University of Chicago


"For the pioneering discovery of the exact solution of the Kondo and Anderson models, opening a new field of exact treatments of quantum impurity systems."


Paul Wiegmann, Ph.D., is the Robert W. Renneker Distinguished Service Professor at the University of Chicago (Ill.). Dr. Wiegmann contributed to the broad spectrum of fields in condensed matter, statistical physics, and mathematical physics. His work on integrable models of quantum field theory lead to exact solutions of important problems, such as Kondo and Anderson models for magnetic alloys, nonlinear sigma models of magnetism and quantum field theory, and electronic models with strong interaction. During the 1990’s, Dr. Wiegmann focused on topological phenomena in electronic and magnetic systems with strong interaction, identifying the role of topology in formations of quantum states by interaction. He developed a theory of topological mechanism of superconductivity which has a potential application in doped Mott insulators, while also obtaining the exact solution of the celebrated Hofstadter problem, describing a singular continuum spectrum of a particle on a lattice in a strong magnetic field. During the 2000’s, Dr. Wiegmann developed the theory of Laplacian growth and the Hele-Shaw problem, finding a deep relationship between growth processes and the theory of random matrices. This lead Dr. Wiegmann to the theory of singularities and viscous shocks in the problem of viscous fingering instability. At the same time, he proposed a theory of quantum hydrodynamics to address nonlinear dynamics in electronic systems with a restricted geometry. His current interest is the geometric interference phenomena, the geometric theory of quantum Hall effect, and hydrodynamic description of quantum states with topological characterization. Dr, Wiegmann graduated from the Moscow Institute of Physics and Technology (Russia) in 1975 and obtained his Ph.D. from the Landau Institute for Theoretical Physics (Chernogolovka, Russia) in 1978. He has been a Humboldt Fellow, a Simons Fellow, and has held the Internationale Blaise Pascal and Kramers chairs. He is a fellow of the American Physical Society.