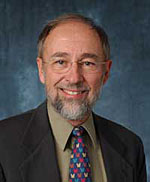 Noel A. Clark
University of Colorado


"For groundbreaking experimental and theoretical contributions to the fundamental science and applications of liquid crystals, particularly their ferroelectric and chiral properties."


Noel Clark received B.S. degree in 1963 and M.S. degree in 1965 from John Carroll University, and his Ph.D. from MIT in 1970, where he was an NSF Predoctoral Fellow, working under the direction of George Benedek. He then spent 7 years at Harvard as a Research Associate and Assistant Professor of Applied Science, and member of the Harvard Liquid Crystal Group. In 1977 he joined the faculty of the Department of Physics of the University of Colorado, Boulder, where he is now Professor of Physics and Director of the Liquid Crystal Materials Research Center. In 1984 he co-founded Displaytech, Inc., currently the world's largest producer of ferroelectric liquid crystal devices and materials.

Clark has worked in many areas in soft condensed matter and complex fluid physics, including liquid crystals, colloidal liquids and crystals, liquid structure and melting, and biophysics. His liquid crystal research has focused on the use of ultrathin freely-suspended films to study the effects of interfacial confinement and low dimensionality on phase behavior, and on liquid crystal electro-optics, in particular the physics and applications of ferroelectric liquid crystals. His current interests are in liquid crystals of nucleic acids and in the exotic soft phases formed by banana-shaped molecules, especially their interplay of polarity and chirality, and the appearance of macroscopic chiral phases in fluids of achiral molecules.