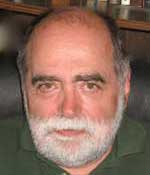 
"For his pioneering contributions to our understanding of quantum chromodynamics at high energy density and laying the theoretical foundations of experimental ultrarelativistic heavy ion collisions. His work has been a crucial guide to experiments at RHIC and LHC, and he has mentored a generation of young theorists"


Larry McLerran received BS (1971) and PhD (1975) degrees from the University of Washington. He was a postdoctoral fellow at MIT (1975-­‐1978), and SLAC (1978-­‐1980), Assistant and Associate Professor at the University of Washington (1980-­‐1984), a member of the permanent scientific staff at Fermilab (1984-­‐1988), and a Professor at University of Minnesota, (1984-­‐1999), where he was the first director of the William Fine Theoretical Physics Institute (1989-­‐1992). In 1999, he became a Senior Scientist at BNL. He was Group Leader for Nuclear Theory and is Theory Director RIKEN-­‐BNL Center. His awards include the Alfred Sloan Fellowship, Alexander Humboldt Prize which supported stays at the University of Frankfurt, Hans Jensen Prize at University of Heidelberg, and an Honorary PhD and the Liu Lian Shou Professorship at Central China Normal University in Wuhan. He was involved in early studies of the Quark Gluon Plasma developing perturbative and Monte Carlo methods. He and collaborators recently argued for the existence high baryon density Quarkyonic Matter. He computed the rate of baryon number violation in electroweak theory. He did pioneering work on the properties of ultrarelativistic nuclear collisions, estimating achievable energy densities. He and collaborators argued that a high gluon density Color Glass Condensate (CGC) is the part of a nuclear wavefunction that controls the initial stages of nuclear collisions. He and colleagues showed that after a collision, the CGC forms a highly coherent ensemble of colored fields called the Glasma. The Glasma eventually evolves into a thermalized Quark Gluon Plasma. In 2005, he and Miklos Gyulassy argued that a Quark Gluon Plasma had been made at RHIC from the initial CGC of the nuclei.