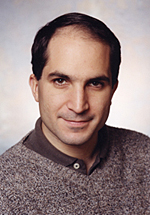 
"For providing a deeper understanding of the correspondence between string theory in d space-time dimensions and Yang-Mills theory in d-1 dimensions, and for communicating fundamental principles of theoretical physics to the general public, including Spanish-speaking audiences."


Maldacena completed his undergraduate education in 1988 at the University of Buenos Aires and he also studied physics at Instituto Balseiro at the Universidad de Cuyo in Bariloche, Argentina. He received a Master of Arts degree in 1993 and his Ph. D. in 1996 from Princeton University. After being a Research Assistant at Rutgers University, he went to Harvard as a Visiting Professor, an Associate Professor and became a Professor of Physics in 1999. Currently, he is a Professor at the Institute for Advanced Study in Princeton, New Jersey. In 1999 he was awarded the MacArthur Fellowship. Some of his other prizes and fellowships include the Sloan Fellowship, Packard Fellowship in Science and Engineering, the UNESCO Husein Prize for Young Scientists, the Sackler Prize in Physics, and the Xanthopoulos Prize in General Relativity.

Maldacena's work focuses mainly on the description of black holes in string theory and on the relation of the large N limit of gauge theories and gravity. His motivation consists of the relationship of D-branes and black holes and he has also proposed a duality between gauge theories and gravity. He plans to continue exploring this relationship and hopes to make progress in this direction in order to shed light on conceptual issues and provide useful analytical tools to tackle such problems.