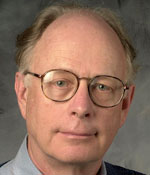 
"For a broad range of fundamental contributions to relativistic stars, quantum fields in curved spacetime, and especially quantum cosmology."


James B. Hartle was educated at Gilman School, Princeton University (AB,1960), and the California Institute of Technology where he completed a Ph.D. in 1964 with Murray Gell-Mann. He has held positions at the Institute for Advanced Study, Princeton University, and the University of Chicago. He is currently Research Professor and Professor of Physics Emeritus at the University of California, Santa Barbara and an external faculty member of the Santa Fe Institute. His scientific work is concerned with the application of Einsteins relativistic theory of gravity--general relativityto realistic astrophysical situations, especially cosmology. He has contributed usefully to the understanding of gravitational waves, relativistic stars, and black holes. He is currently interested in the quantum origin of the universe and the earliest moments of the big bang where the subjects of quantum mechanics, quantum gravity, and cosmology overlap. He has been an Alfred P. Sloan Fellow, a NATO Senior Science Fellow, and a John Simon Guggenheim Fellow. He is a fellow of the American Physical Society, a fellow of the American Academy of Arts and Sciences, a member of the US National Academy of Sciences, and a founder and past director of the Kavli Institute for Theoretical Physics.