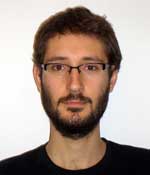 
Fèlix Campelo Aubarell was born in 1981 in Vilafranca del Penedès, near Barcelona. He studied physics at the University of Barcelona, graduating in 2003.

In 2003 he started his Ph.D. at the University of Barcelona under the supervision of Dr. Aurora Hernandez-Machado. He developed a phase-field model to study the stationary shapes of vesicles, which he later applied to study the dynamics of shape instabilities of fluid vesicles upon the insertion of amphiphilic molecules.

During this time, he did a three-month long research stay at the École Normale Supérieure in Paris, under the guidance of Prof. Martine Ben Amar. He later spent one year at Tel Aviv University under the supervision of Prof. Michael M. Kozlov, where he derived a physical model of the hydrophobic insertion mechanism of membrane bending by proteins.

In November 2008 he defended his thesis, entitled Shapes in cells. Dynamic instabilities, morphology, and curvature in biological membranes, getting the maximal qualification.

In 2009 he moved for a post-doc to Vivek Malhotras lab at the Center for Genomic Regulation in Barcelona. There, he works on both experimental and theoretical approaches to ellucidate the mechanisms of transport carrier formation in the Golgi apparatus.