Imagine a nexus for physicists, a supernatural black hole that attracts nearly every internationally-recognized star of atoms and G. But instead of absorbing them into oblivion, the grand attractor shelters them in orbit, perhaps in a nurturing embrace that engenders new ideas and innovations in physics. For many scholars in the early part of last century, this was not a Heinlein fantasy; it existed in the form of a summer school for theorists in the Midwestern United States.

The University of Michigan (U-M) Summer Symposium in Theoretical Physics, held annually for less than 15 years in between WWI and WWII, is considered to have played a pivotal part in advancing physics and helping to cement the US’s province in the field. On December 11, 2010, APS President Curtis G. Callan, Jr. presented a plaque to be displayed in U-M’s Randall Laboratory. It reads: “This plaque honors the Michigan Summer Symposium in Theoretical Physics, 1928-1941, under the leadership of Harrison Randall. During this period virtually every world-renowned physicist lectured at the symposium, which played a critical role in helping America achieve international status in theoretical physics.”

Beginning in 1928, every summer, rock stars of theoretical physics gathered at U-M’s Old Physics Building and on the grassy “Diag” to listen to lectures and argue about new directions of the discipline. The scientists taught short courses lasting a few weeks to two months on topics such as Oppie’s “General Quantum Theory of Transitions" (1931), Fermi’s “Quantum Electrodynamics" (1930) and Bohr’s "The Foundations of Quantum Mechanics" (1933)1. The only notable exception to the participants list was Einstein- he never attended. 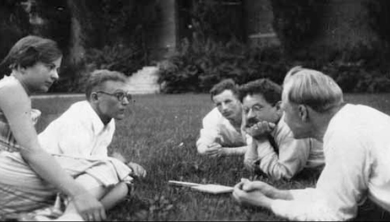 A typical line-up, as promoted in the June 5, 1936 issue of Science, included Lawrence, Bethe, Rabi and Dennison and Condon, among others. Of particular note for that year’s conference, was the mention in the article that “PROFESSOR W. HEISENBERG, of Leipzig, who had planned to lecture on nuclear physics throughout the symposium on theoretical physics at the University of Michigan, has found it impossible to be at Ann Arbor this summer.”2 Heisenberg had lectured at the fifth summer school in 1932, and would do so again at the twelfth in 1939.

The origins of the Summer School are attributed to Harrison McAllister Randall, the late Chairman of the U-M Physics Department, who saw the light of a theoretical physics evolution occurring in Europe and sought to expand on those ideas in the States. He recruited faculty with Old World education, including Oskar Klein, Otto Laporte, Samuel Goudsmit, and George Uhlenbeck. In addition, he hired David M. Dennison, who had earned his Ph.D. at Michigan but had pursued postdoctoral work under Bohr in Copenhagen.3

Enthralled with the novel theoretical physics concepts that his Continental colleagues injected into the department, Randall initiated summer workshops in which faculty and pupils could get up to speed. Although for three years in the 1920s experimental physics had a forum as well, “Randall thought the talks in theoretical physics were so much more rewarding that he rededicated the summer sessions to theoretical physics alone.”4

Soon, summers in Ann Arbor were blossoming with the distinctive aroma of genius, as approximately one hundred professors and grad students descended each year on the U-M campus, sleeping in frats and rented rooms, to take classes from the theoretical thought leaders themselves. “It was the only summer program in the U.S. where American physicists could learn about the new ideas from the founders of the field.”5

The importance of these summer sessions in bolstering physics cannot be overstated, according to U-M Professor of Physics Jens Zorn. "One can track the origin of many significant publications to exchanges of personal letters and manuscripts between physicists who had become acquainted at the Summer Symposia,” he stated. “Those interactions, supplemented by the exchanging of reprints of journal articles, were important sources for students and researchers, since the handful of books on quantum mechanics and nuclear physics did not cover the latest advances."6

Furthermore, "it was a place where you came to learn the modern approach to the theory of molecules, atoms, and nuclei," he said. "Quantum mechanics really got rolling in 1926 and nuclear physics made great advances in 1932. In those years the number of people who really knew quantum mechanics was fewer than 500, and a substantial fraction of those were participants in the Michigan Summer Symposia."7