In March of 2007, the APS presented Johns Hopkins University with a plaque commemorating the work of Henry A. Rowland, professor of physics and first chair of the physics department at the university, and also first president of the American Physical Society in 1899. Rowland’s best known contribution is the diffraction grating that bears his name, but he also made important strides in magnetism and thermodynamics.

In 1870, Rowland graduated as a civil engineer from the Rensselaer Polytechnic Institute at Troy, N.Y. After a short stint as a professor of natural philosophy at the University of Wooster in Ohio, he returned to RPI as an assistant professor. He was then invited to become the chair of the physics department at the newly created Johns Hopkins University where he stayed from 1875 to his death in 1901.

During his time at Hopkins, Rowland concentrated on research regarding the effect of an electrically charged body in motion, showing it gave rise to a magnetic field. He did this by looking for the magnetic effect of a charged rotating disc, at a time when the physicist James Clerk Maxwell’s equations on electricity and magnetism were the subject of vigorous debate. His results were the first demonstration that a charged body in motion produces a magnetic field.

Maxwell appreciated the value of Rowland’s experiments and had them published in the Philosophical Magazine. Although his work was known in Europe, Rowland was mainly overlooked by fellow American scientists.

Rowland’s research was not directed on discovery of new phenomena in physics, but on clarifying existing theories. While at Hopkins he went about experiments to re-calibrate the value of the ohm, the standard unit for measuring electrical resistance. The number he found was much smaller than the original and became accepted as the more correct of the two. Other phenomena he studied involved thermodynamics, including the specific heat of water, which is the amount of energy it takes to increase its temperature by one degree. He found that the specific heat varied with temperature, an effect that contradicted what was then commonly believed.

In 1882 he gave a description of the diffraction grating with which his name is specially associated and which has been of enormous advantage to astronomical spectroscopy. A diffraction grating consists of a plate (reflective or transparent) engraved with an extremely large number of fine parallel lines. It is used to analyze spectra by dispersing the light into its component colors or wavelengths. In the 1870’s spectroscopy had serious limitations, as the diffraction gratings were relatively imprecise. Rowland invented a ruling engine that achieved unprecedented accuracy by means of a main screw that could move the grating an extremely small distance between each line to be ruled. His gratings were more than an order of magnitude larger and more accurate than any previous ones. For a generation they were the foundation of physical, chemical and astronomical spectroscopy around the world.

The National Academy of Sciences awarded Rowland the Henry Draper Medal in 1890 for his contributions to astrophysics. In 1899 Rowland was one of the founders of the American Physical society and became its first president, ruling until his death in 1901. 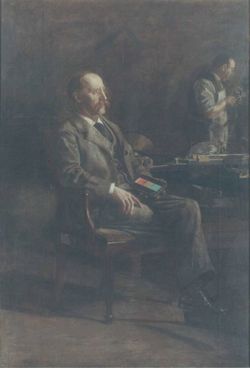