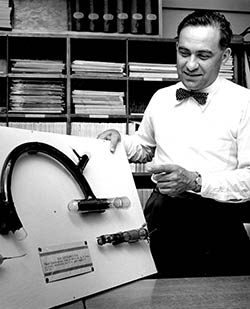 A laboratory with national and international significance to physics and myriad sister disciplines, and a scholar whose design and improvement of strategic technology were honored as part of the APS Historic Sites Initiative.

On October 29, 2012, APS President-elect Michael Turner presented a plaque to the University of Minnesota (UM) in recognition of the role the John Torrence Tate Laboratory and Alfred O. C. Nier, one of its most prolific scientists, have had on design of instruments that set new standards internationally. Achievements involved the development and application of mass spectrometry, including the first-ever separation of the Uranium-235 isotope.

Ronald A. Poling, Head of the Department of Physics and Astronomy, accepted the plaque on behalf of the department and university.  The citation on the plaque reads: "Alfred O. C. Nier and the Tate Laboratory of Physics: At this site, from 1936 to 1994, Alfred Nier designed and developed mass spectrometers with which he pioneered critical research in nuclear physics, isotopic and chemical analysis, biochemistry, geophysics, geochemistry, earth and planetary atmospheres, diagnostic devices, and industrial applications."

Beginning in the late 1930's, UM Professor Nier, whose bachelors and masters degrees are in electrical engineering, labored in the Tate Laboratory, where he designed and built increasingly sensitive mass spectrometers, perfecting a technology with applications ranging from leak detection to homeland security.

Most dramatically, on February 28 and 29, 1940, Nier completed the first ever separation of the U-235 isotope. At the urging of Enrico Fermi, Nier had designed and constructed a new mass spectrometer specifically to do this separation. He received samples of uranium hexafluoride from Professor John Dunning at Columbia University, but found that this volatile material was unusable in his mass spectrometer. Instead, Nier analyzed small quantities of uranium tetrachloride and tetrabromide that he had brought with him from Harvard University, where he had been a postdoctoral associate.

By the afternoon of February 29, Nier had used his mass spectrometer to separate samples that he believed to be U-235. He pasted them onto a piece of nickel foil, which he affixed to the margin of a handwritten letter, which he mailed to Professor Dunning at the main Minneapolis Post Office. Dunning received the letter on March 1 and that night bombarded Nier's samples with neutrons from the Columbia Cyclotron. By the next morning Dunning sent word that Nier's mass spectrometer had indeed separated the world's first sample of the fissile component of uranium.

Following this achievement, Nier continued mass spectrometer development, with a particular goal of testing for leaks in uranium gas diffusion plants. Subsequently, he developed miniaturized mass spectrometers for use in space probes, primarily to analyze the atmospheres of other bodies in our solar system. The Martian crater "Nier" is named after him.

Nier's work on mass spectrometer development is not the only significant role that Tate Laboratory has played in the history of physics. It also figures prominently in the story of the APS journals. Tate hosted the offices of the Physical Review between the 1920's and the early 1950's, and in 1929 was the site of the founding of the journal Reviews of Modern Physics.