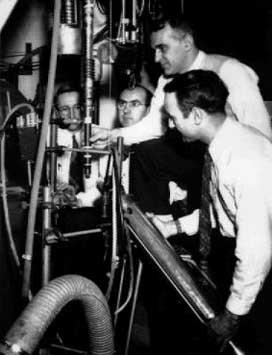 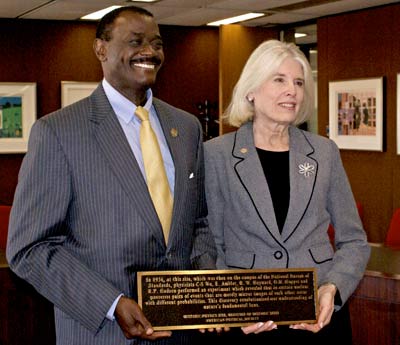 Symmetries have long played a crucial role in physics. Physicists had assumed that our world is indistinguishable from its mirror image—a notion known as parity conservation—and prevailing scientific theory reflected that assumption. “In fact, in the entire development of physics, up through the early decades of this century, no such phenomenon, law, or experiment had come to light whose outcome differentiated between right and left,” wrote Paul Forman, Curator for Modern Physics of the National Museum of American History, Smithsonian Institution, in 1982. “Physicists therefore felt themselves more than justified in assuming that none such existed, that Nature herself made no distinction between left and right.”

But that all changed during the period between Christmas and New Year’s Eve in 1956. At that time, a team of physicists associated with the National Bureau of Standards (NBS) (which later became the National Institute of Standards and Technology), devised and performed experiments analyzing beta decays, which ultimately demonstrated that the emission of beta particles is greater in the direction opposite to that of the nuclear spin. Thus, since the beta emission distribution is not identical to the mirror image of the spinning cobalt-60 nucleus, parity was unequivocally shown not to be conserved.

“Great was [the physicists’] surprise when…they discovered that Nature is a semi-ambidextrous southpaw,” noted Forman.

In recognition of this startling and indeed game changing discovery, the NBS, part of which is now the site of the University of District Columbia (UDC), was recognized as an APS Historical Site. On November 9, 2011, APS Executive Officer Kate Kirby presented a commemorative plaque to Allen L. Sessoms, UDC President, who is a nuclear physicist and an APS Fellow (2008). The plaque reads:

“In 1956, at this site, which was then on the campus of the National Bureau of Standards, physicists C-S Wu, E. Ambler, R.W. Hayward, D.D. Hoppes and R.P. Hudson performed an experiment which revealed that in certain nuclear processes pairs of events that are merely mirror images of each other occur with different probabilities. This discovery revolutionized our understanding of nature's fundamental laws.”

Parity conservation enjoyed exalted status among the most fundamental laws of physics, including conservation of energy, momentum and electric charge. It implies that Nature is symmetrical under reflections in a mirror. As a consequence, two similar radioactive particles spinning in opposite directions about a vertical axis should emit their decay products with the same intensity upwards and downwards. Yet although there were many experiments that established parity conservation in strong interactions, the assumption had never been experimentally verified for weak interactions like beta decay. Indeed, when the weak force was first postulated to explain disintegration of elementary particles, it seemed inconceivable that parity would not hold there as well.

In the 1950s, high-energy physicists began observing phenomena that could not be explained by existing theories, most notably the decays of K mesons emitted in the collision of a high-energy proton with an atomic nucleus. The K meson appeared in two distinct versions, decaying into either two or three pi mesons, (which necessarily had opposite parity), although in all other characteristics they seemed identical. In June of 1956, theoretical physicists Chen Ning Yang and Tsung Dao Lee submitted a short paper to the Physical Review raising the question of whether parity is conserved in weak interactions, and suggesting several experiments to decide the issue.

The NBS team set about performing beta decay experiments. When the results were in, they arrived at the astonishing conclusion that the emission of beta particles is greater in the direction opposite to that of the nuclear spin; parity was clearly demonstrated not to be conserved. Leon Lederman, who at the time worked with Columbia University's cyclotron, performed an independent test of parity with that equipment, involving the decay of pi and mu mesons, and also obtained distinct evidence for parity violation.

Feynman lost his bet. The result shattered a fundamental concept of nuclear physics that had been universally accepted for 30 years, thus clearing the way for a reconsideration of physical theories and leading to new, far-reaching discoveries - most notably a better understanding of the characteristics of elementary particles, and a more unified theory of the fundamental forces.

In 1957, Lee and Yang were jointly awarded the Nobel Prize in Physics for their contribution to disproving parity conservation. Despite the fact that the NBS team itself didn’t receive the same recognition, its members were highly regarded in the physics community. In particular, Professor Chien-Shiung Wu is considered a trailblazer for women in science. Born in China in 1912, she received her PhD from the University of California at Berkeley in 1940 with a focus on nuclear fission, and had worked on the Manhattan Project during World War II. She was a member the Columbia University Physics Department faculty during her time on the parity experiments and remained there until her retirement.

She won many honors, including the 1959 American Association of University Women (AAUW) Achievement Award. In noting the physicist’s achievements, Janet Howell Clark of the AAUW Fellowships Awards Committee, said Wu’s investigations “led to the solution of mysteries on the fringe of human knowledge.”

Wu was also the first woman president of the APS in 1975, the first woman to receive an honorary doctorate from Princeton, and the first female recipient of the National Academy of Sciences’ Comstock Prize. In her acceptance speech for the AAUW award, Wu said, “It is the courage to doubt what has long been established and the incessant search for its verification and proof that pushes the wheel of science forward.”