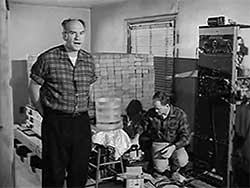 David Frisch (left) and James Smith explain the details of their experiment.

On top of a mountain in New Hampshire is a scientific field station that has served as a center for extreme weather studies for more than 100 years. Mount Washington Observatory sits at 6288 feet above sea level and provides ample opportunity for scientists to observe and maintain a record of weather data, perform weather and climate research, and foster public understanding of the mountain and its environment. It was established in 1870 by a ragtag group of intrepid scientists whose simple goal was to improve our ability to predict the weather, and it quickly drew the interest of the United States Signal Service (the precursor to the National Weather Service), which provided formal support. The summit station was the first of its kind in the world, and in 1934, recorded the world’s fastest surface wind speed ever observed by humans: 231 mph.

Today, Mount Washington Observatory is a non-profit research and educational institute with a goal of advancing our understanding of weather and climate. Current projects include research on rime ice formation, air pollutant trends, the effects of climate change on high altitude environments, and global tropospheric chemistry. Furthermore, as a location that researchers still joke is "Home of the World's Worst Weather", the Observatory also partners with manufacturers to conduct product testing.

While its place in the history of atmospheric science may be well known, it is important to note that Mount Washington Observatory is also the site of a very special series of physics investigations that are equally significant. It was here in the early 1960s that David H. Frisch and James H. Smith performed classic experiments showing that the observed lifetime of the muon (a particle 207 times more massive than the electron) traveling close to the speed of light is lengthened in precise accord with the predictions of the special theory of relativity.

Muons are the most abundant energetic charged particles at sea level. “A charged particle cannot avoid losing energy by ionization. As it passes through matter the charged particle interacts with the electric fields and typically knocks loose some of the loosely bound outer electrons. A muon interacts very little with matter except by ionization. Because of this, muons can travel large distances and commonly reach the ground. However, they lose energy proportional to the amount of matter they pass.”1

The muon had been observed as a penetrating component of cosmic rays by J. C. Street, E. C. Stevenson, S. H. Neddermeyer, and C. Anderson in 1936-7. By 1940, it was clear the muon was a massive partner of the electron, and not the particle predicted in 1935 by Hideki Yukawa to explain the short range of nuclear forces, as first was thought. In 1941, Bruno Rossi and David B. Hall conducted experiments at different altitudes in Colorado that demonstrated that the lifetimes of muons traveling near the speed of light appear longer, in qualitative agreement with the prediction of the special theory of relativity.2

In 1962, at Mount Washington Observatory, Frisch of MIT and Smith of the University of Illinois performed more precise experiments that were able to confirm this agreement within their margin of error by comparing the rate of detection of muons with that observed near sea level at Cambridge, Massachusetts. They documented their work both in a paper and in a film; their experiment is a classic and elegant demonstration of the experimental validity of the special theory of relativity.3 Indeed, versions of their experiment continue to be done to this day by physics students who want to see for themselves how special relativity can be verified in the laboratory.