Discovery of the Positron

In October 2008, John Rigden, Chair of the APS Historic Sites Committee, presented Caltech with a plaque in honor of Professor Carl David Anderson and his discovery of the positron. In 1932, Anderson, then a postdoc in the physics department, was photographing the track of a cosmic ray particle in a cloud chamber. The track had an unusual curvature, and he deduced that it could only be produced by a particle “carrying a positive charge but having a mass of the same order of magnitude as that normally possessed by a free negative electron."1 He called this positively-charged electron a positron – the first identified antiparticle. For his accomplishment, Anderson shared the Nobel Prize for Physics in 1936. He was 31 years old. 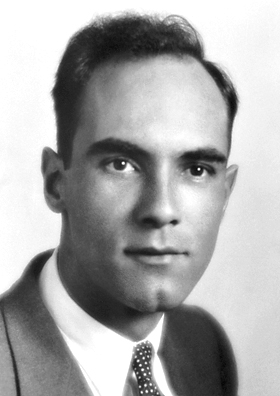 It was Nobel Laureate Paul Dirac who first suggested the existence of antimatter. In 1928, by combining the newly discovered quantum theory with Einstein’s theory of relativity he found that every particle has a corresponding antiparticle, each with the same mass and spin of its twin, but with the opposite electrical charge.2

Carl David Anderson (1905-1991) graduated from Caltech with a B.Sc. and a PhD in physics and Engineering in 1927 and 1930, respectively.3  His doctoral thesis and subsequent work as a postdoc dealt with X-rays. But soon cosmic rays were discovered by physicist Victor Hess (with whom Anderson would later share the Nobel Prize), and Anderson began research on these high energy particles, guided by his mentor Robert A. Millikan.

A cloud chamber was the experimental piece of equipment of choice to study cosmic rays. This device is a cylinder with glass end plates containing a gas saturated with water vapor.4  When ionized particles pass through the chamber, they leave trails of water drops. By measuring the density of the drops, one can determine how much ionization has occurred and thus what kind of particle produced them.5

Anderson designed and built his own cloud chamber and surrounded it with an electromagnet which caused the ionized particles to move on circular trajectories. When he examined the cosmic rays within the cloud chamber, he noticed that there appeared to be showers of both positively and negatively charged particles, as determined by the direction of curvature of the track. Moreover, the mass of the positively charged particles was smaller than a proton’s.6  In order to prove that the particles were indeed positively charged, and not merely negatively charged electrons moving in the opposite direction, he put a lead plate in the chamber and captured his evidence in a now famous photograph. In the picture, a particle is seen approaching the metal plate from the bottom. When it hits the plate, it loses energy but continues to curve in the direction appropriate for a positively charged electron, which he later called a positron.

Anderson’s remarkable discovery of antimatter, and subsequent discoveries of other antiparticles such as antiprotons and antineutrons, paved the way for speculation on its practical use.  Antimatter, as portrayed in works of science fiction such as Star Trek, forms the basis of high energy propulsion systems that could potentially take humankind far into space. But the amount of antimatter so far created on Earth is orders of magnitude short of what would be needed.

However, in medicine, positron emission tomography (PET) scans rely on the annihilations of positrons and electrons within the body to provide useful images. Patients who have PET scans are injected with a radioactive isotope and the resulting gamma ray pairs produced by the annihilation help provide a 3-D image of the inner workings of the body.7  The PET scan is a valuable tool for measuring important functions such as blood flow and oxygen use, and detecting cancer, brain disorders, and heart problems.8

2  APS News – This Month in Physics History, August 1932: Discovery of the Positron.

4  APS News – This Month in Physics History, August 1932: Discovery of the Positron.

7  APS News – This Month in Physics History, August 1932: Discovery of the Positron.