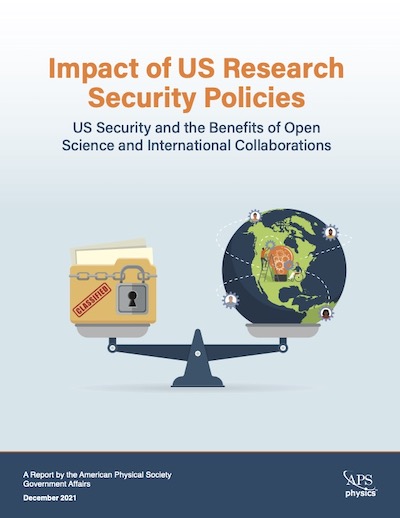 COLLEGE PARK, MD, December, 20, 2021 — The US federal government’s current approach to research security concerns is causing a significant number of researchers to feel unwelcome in the United States, leading them to consider taking their talents to other countries, thereby jeopardizing the nation’s security, according to a new report by the American Physical Society (APS).

Titled “Impact of US Research Security Policies: US Security and the Benefits of Open Science and International Collaborations,” the report states that, for the US to remain a global leader in science and technology, the nation must provide an environment that encourages open science and the free change of information, and be a destination of choice for the world’s best and brightest minds to study and work.

But in an attempt to address concerns with foreign attempts—particularly by China—to steal US-based science and technology, the federal government’s research security policies are having a “chilling effect” on the nation’s researchers, causing them to withdraw from international collaborations that bring new scholars, ideas, and techniques to the US research and development ecosystem.

“When we reduce openness in fundamental research, we compromise our security by cutting ourselves off from some of the most talented scientists, and we also deny ourselves the progress that comes from broad collaboration,” said Phil Bucksbaum, a Stanford University physics professor and APS Past President who chairs the APS Physics Policy Committee.

The report, based on a September 2021 survey of APS members, reveals that the US government’s current approach to addressing research security concerns is weakening, not strengthening, the nation’s scientific enterprise. The survey highlights the urgent need for a new approach that thoughtfully protects the nation against evident security risks, while also welcoming international talent and promoting international collaborations.

The APS survey reveals that nearly one in five physics professionals (non-student APS members) in the United States have either chosen—or been directed—to withdraw from opportunities to engage in professional activities with colleagues based outside the United States due to current research security guidelines.

In response to the impacts, the APS report offers a series of policy recommendations that would, if implemented, significantly improve the US research environment and protect the nation against evident security risks.

For scientists, the report recommends that they recommit to research integrity, which includes openness, honesty, objectivity, fairness, disclosure, accountability, and stewardship. The principles were outlined in a February 2020 APS Board Statement.

For the US federal government, it states that the nation should make a clear recommitment to open science, reformulate US research security policies, and improve both disclosure policies and high-skilled visa and immigration policies.