COLLEGE PARK, MD, June 25, 2021 — A former particle accelerator at Lawrence Berkeley National Laboratory and an academic building at the University of California, San Diego have been designated Historic Sites by the American Physical Society (APS). Each site will receive a plaque acknowledging its exemplary contributions to physics, including the discovery of the anti-proton and the development of Density Functional Theory.

“We are pleased to recognize two very different examples of physicists doing what physicists do best, building things and making them work, in one case apparatus (the Bevatron and Bevalac) and in the other a new way of looking at and carrying out quantum mechanical calculations (Density Functional Theory),” said APS Historic Sites Committee Chair Virginia Trimble, a professor of physics and astronomy at the University of California, Irvine. The 2 locations were selected from 15 member-nominated sites.

For nearly 40 years, the Bevatron was among the largest and highest-energy particle accelerators in the world. It was designed to accelerate protons to billions of electron volts. Just one year after its completion in 1954, Berkeley Lab and University of California, Berkeley physicists Emilio Segrè and Owen Chamberlain used the facility to confirm the existence of antimatter by producing anti-protons.

“The Bevatron is one of the iconic instruments in the history of nuclear and particle physics. It was the lens through which humanity saw fully a universe that contains anti-matter and the fact that at the fundamental level, there exists asymmetry in our cosmos,” said APS President Jim Gates.

That discovery, which was awarded the 1959 Nobel Prize in Physics, was a significant milestone in the new era of government-funded “Big Science.” 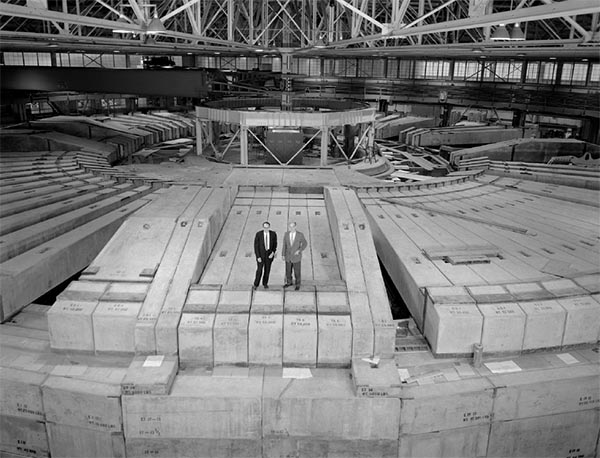 "The Bevatron site designation is a symbol of what teams of people from many fields of science, engineering, and operations can do when they work together across disciplinary boundaries to solve a problem — in this case unlocking the mysteries of the atom," said Berkeley Lab Director Mike Witherell. "It demonstrated the kind of big team science that evolved into the national laboratory system and led to many more discoveries and solutions to humankind's most challenging problems over the decades. We are honored to have this contribution to scientific history recognized in this way."

In the 1970s, the Bevatron was combined with the Super Heavy Ion Linear Accelerator to become the Bevalac, the predecessor to today’s Relativistic Heavy Ion Collider at Brookhaven National Laboratory and the Large Hadron Collider at CERN. The Bevatron/Bevalac ended its service in 1993 and was demolished between 2009 and 2012. On the site of the former Bevatron now stands the 80,000 square foot Integrative Genomics Building (IGB) — home to the DOE Joint Genome Institute (JGI), the DOE Systems Biology Knowledgebase (KBase), and the National Microbiome Data Collaborative (NMDC).

On this site in 1955, a year after completion of the Bevatron, Chamberlain, Segrè, Wiegand, and Ypsilantis reported the discovery of the anti-proton. In the 1960s bubble chambers here revealed many new particles, evidence for SU(3) symmetry, now known to be the sign of the three lightest quarks. Later, Ghiorso conceived and Grunder built the Bevalac by merging the Bevatron and the SuperHILAC into the world’s first relativistic heavy-ion accelerator. It accelerated ions from protons to uranium, launching high-energy heavy-ion physics and clinical radiotherapy with heavy-ion beams.

Understanding the electronic properties of complex systems is essential to the design and engineering of new materials and drugs. Walter Kohn and Pierre Hohenberg on sabbatical in Paris developed a theorem for the electron ground state energy to depend on the electron density distribution instead of the usual potential energy due to the nuclei. In Building C (later named Mayer Hall), from 1964-66, Kohn and Sham laid the foundation of a computation method, based on a single-particle equation composed of its quantum kinetic energy and the potential energy including the interaction effects. That became the basis for computation of material properties of the electrons and the nuclei. For this work, Kohn received the 1998 Nobel Prize in Chemistry.

“I recall the happy times in Mayer Hall working with Walter Kohn developing the ‘Kohn-Sham equation’ and with Philip B. Y. Tong doing the first computation. It is amazing that so many scientists and engineers build on the method to develop a quantitative understanding of all kinds of materials hence,” said Lu J. Sham, Distinguished Professor Emeritus of Physics, UC San Diego.

“As the UC San Diego Department of Physics celebrates its 60th anniversary, it is remarkably fitting that the American Physical Society has designated Mayer Hall as an esteemed historic site,” said Division of Physical Sciences Dean Steven Boggs. “I enthusiastically applaud this recognition in honor of the momentous achievements of Walter Kohn, one of the founding faculty members of our Physics Department, and revered Emeritus Professor Lu Sham.”

Here Walter Kohn and Lu Jeu Sham reduced to practice the method of Density Functional Theory (DFT), whose premises had been laid by Kohn and Pierre Hohenberg. DFT allows calculation of all the properties of quantum many-body systems from the ground state density of particles, a much simpler quantity than the wave function. Today, it is the most used technique for calculating the properties of nuclei, molecules, polymers, macromolecules, surfaces and bulk materials in the chemical, biological and physical sciences. For this achievement, Kohn was awarded the Nobel Prize in Chemistry.

Learn more about the initiative by visiting the Historic Sites page or contacting honors@aps.org. 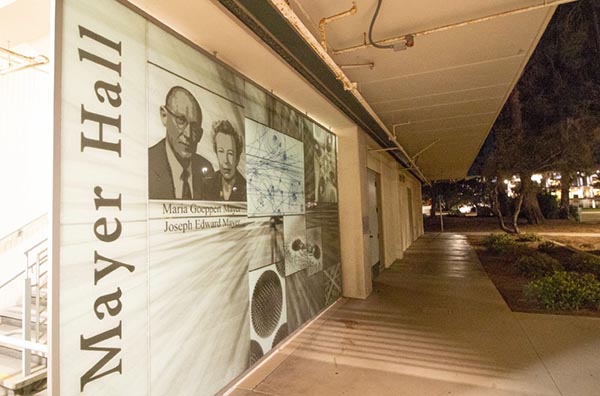 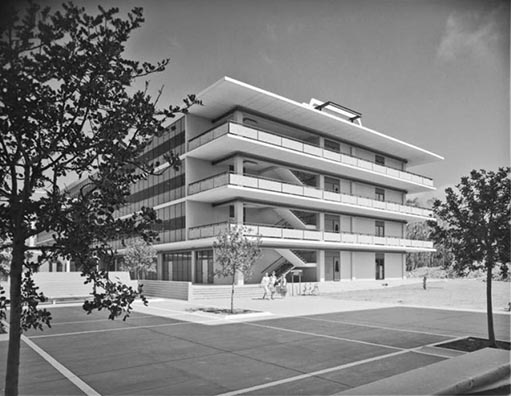