Desiré found her dream job at the Exploratorium, a museum where she works in science education and teaches hands-on professional development workshops.

Early Interest in STEM
As a child, Desiré enjoyed learning about science, engineering, and math. In particular, she liked to take things apart and put them back together. She learned about physics in high school and loved her first class in the subject her senior year.

Desiré decided to major in chemical engineering at a community college. She was intrigued by her physics, chemistry, and math courses; however, upon transferring to UCLA, she realized that the upper level chemical engineering courses were not as stimulating for her as the introductory physics courses had been. Taking classical mechanics and quantum mechanics later solidified her decision to pursue physics. She was too far into her chemical engineering program to change her major, but after graduating, she decided to go to graduate school for Chemical and Material Physics.

Earning her PhD
Desiré’s graduate program at UC Irvine allowed her to apply aspects of both physics and chemistry to various projects. Focusing on femtosecond laser measurements and spectroscopy, she built different laser and microscope systems throughout grad school. “There was so much really cool physics involved, and I really fell in love with lasers,” Desiré says.

Through science outreach, Desiré realized that she also loved teaching. “I would go to the local kids’ museum and I would teach science there, [and] I would go into classrooms,” Desiré says. Although she had fewer opportunities to teach through her graduate school program than she would have liked, she found a variety of opportunities elsewhere.

Exploring New Opportunities
After earning her PhD, Desiré won the UC President’s Postdoctoral Fellowship, which allowed her to work as a postdoc at UC Berkeley. After three years at Berkeley doing attosecond physics research, Desiré planned to find a career in teaching, especially to a younger audience. “I like taking really complex ideas and turning them into something that a [layperson] can understand, including a child,” she says.

Desiré found a job developing a new science curriculum at the Lawrence Hall of Science, which is essentially Berkeley’s science museum. In a team of learning experts and other scientists, she worked to create an all-digital K-8 science curriculum based on the next-generation science standards, which were still new at the time. “If you start on this curriculum in kindergarten, by the time you’re in 8th grade, you will have a very strong foundation in science and engineering practices,” Desiré says.

Part of Desiré’s responsibilities included writing science articles for middle schoolers. “We were teaching the students to read as a scientist would read,” she says. Desiré also created simulations for the students to apply their knowledge to real-life engineering problems.

Teaching at a Community College
After spending two years completing the science curriculum, Desiré became an Assistant Professor of Laser and Photonics Technology at Irvine Valley College. She worked in a career technical education program focused on students interested in finding a well-paying career as laser technicians. “We were really giving them the skills that they needed to work in the laser and photonics industry… it was the most diverse student body I’ve ever had. It was amazing. I had students as young as 14 and I had students as old as 80,” Desiré says. She taught physics as well as laser laboratory courses that allowed the students to work with industry-grade photonics equipment.

Dream Job at the Exploratorium
The Exploratorium is a hands-on museum of “science, art, and human perception.” In the Teacher Institute, Desiré works with a team of scientists, engineers, and veteran science teachers to develop professional development experiences for middle and high school science teachers. Every summer, the institute invites teachers to a three week program at the museum to show them hands-on lessons they can teach through the museum exhibits as well as through simpler, less expensive versions of the exhibits that they call “snacks.” “Teachers might not be able to bring their classes to the museum, so we [develop “snacks”] so that they can teach the lessons in their classroom,” Desiré explains.

Outside of the Teacher Institute, Desiré is involved in public programming, exhibit development, answering visitors’ questions, and training employees that interact with visitors. “I get to go down to the museum floor and play with the exhibits… to figure out [the best concepts] that I can teach.” Desiré says. “You can teach a whole week’s worth of lessons on one exhibit.”

Desiré loves the attitude of curiosity at the Exploratorium, and she loves hearing visitors ask the same questions that she once had. “One of the most amazing things about my job is that I get to go to work every day at a place where curiosity is not only welcomed, but encouraged… Every single day at the museum, I learn something new,” she says. “I’m the happiest I’ve ever been in my entire life, it’s fantastic. This is my dream job.”

Build and Harness Networks
Desiré emphasizes the benefits of networking for finding jobs. “I know a lot of people, and in grad school, I learned to network and really harness my network,” she says. Désire found her jobs at the Lawrence Hall of Science and the Exploratorium through word of mouth from people she had met and maintained contact with.

Keep Your Mind Open
Desiré also advises keeping an open mind after graduation. “People aren’t aware of how diverse physics is and how many different jobs there are. There are so many different career paths you can take in physics,” she says. Career options exist beyond teaching, working in tech, or being a researcher. 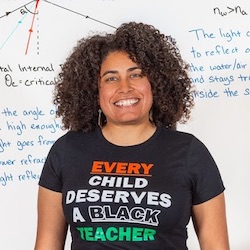