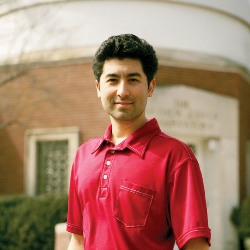 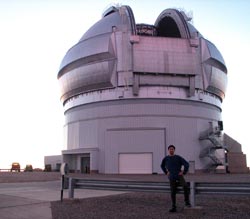 Keivan in front of the Gemini South Observatory in the Chilean Andes. 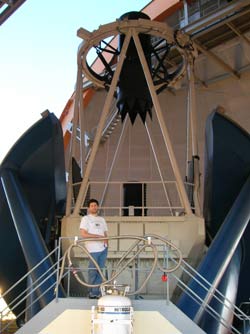 Keivan at the Blanco telescope at the Cerro Toloto InterAmerican Observatory in Chile.

The End of Astronaut Dreams
Keivan was always fascinated with outer space and he even wanted to become an astronaut so he could study space by traveling into it. By the end of high school, he decided that his chances of becoming an astronaut and actually going up into space were slim.

“I thought if I couldn’t go up into space, I would choose a profession that allows me to look up at the stars and ask the same kind of questions,” says Keivan.

Light: Solving the Mysteries of Space
As a researcher, Keivan uses what he has learned about the physics of light to try to answer some of the many unanswered questions about the Universe.

“All the information we have about the Universe, with the exception of the moon and Mars – which people have actually visited or sent probes to – comes to us in the form of light that we receive from different parts of the Universe,” says Keivan.

More specifically, he’s studying thousands of stars like our own Sun to find planets – called exoplanets – that might be orbiting them. To look for these exoplanets, “we use sensitive and precise detectors on medium-sized telescopes to measure the tiny shift in a star’s light spectrum caused by the gravitational tug of a planet orbiting it,” Keivan explains.

The goal of this study is to understand how common these other worlds are and how they form and evolve. The fact that hundreds of exoplanets have been discovered over the past fifteen years has huge implications on humanity’s perspective on our place in the Universe.

Keivan’s research has taken him across the globe from Hawaii to South Africa. In South Africa, Keivan and his research team built their own telescope that could survey the stars visible only from the southern hemisphere. “Having the opportunity to visit far-off places is one of the really exciting and fun aspects of being an astronomer, and South Africa is such a beautiful and special place to visit and work,” says Keivan.

Diversifying Physics and Creating Opportunities
Not only is Keivan committed to teaching and doing research, but he is also involved in numerous programs to encourage minorities to become scientists. One such program is a program where he helps middle and high school students build their own telescopes. In addition, he is co-director of the Fisk-Vanderbilt Masters-to-PhD Bridge Program, a program designed to prepare undergraduate students for doctorate degrees in the physical or biomedical sciences.

“I believe that we will only achieve our full measure of potential and promise when we include as much of humanity as possible, and when the face of science resembles the face of humanity,” says Keivan.

Think Creatively and Try New Things
It might be surprising to find that physicists can be very creative. “We often think of creativity as being something that artists or musicians do. But the best scientists are really wonderfully creative people – thinking up big new ideas, inventing new techniques, tying together experimental evidence and theories in new ways – and it is one of the most fulfilling parts of the job to dream big and constantly try out new ideas,” says Keivan.

Chase After What You Love
Sometimes it can be difficult to do what you love, especially when your family doesn’t understand much about it or it diverges from the traditional career paths in the family. Keivan’s family couldn’t always relate to his work because it was so different from their own. Regardless, they always supported him.

“My parents really just wanted to know that I was passionate about what I was doing and I felt I was making a real contribution to the world, and so that helped me feel like I was truly pursuing my calling,” says Keivan.

Anything Worthwhile Takes Hard Work
Pursuing your dreams and finding what you’re passionate about takes time. Studying physics takes a lot of dedication and commitment. “Becoming a physicist isn’t easy, but nothing worthwhile is easy. If this is your calling, you have a responsibility to answer the call,” says Keivan.