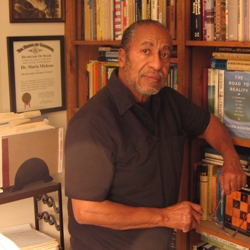 Nurturing a Curious Mind
Some people wait until college to decide what they really want to do in life, but Ron was one motivated youngster. “Even at two or three years of age, I was curious about the ‘workings’ of the universe and of the human mind,” says Ron.

Ron's maternal grandfather, who was highly educated and interested in the sciences and math, encouraged his curiosity and introduced him to a scientific way of looking at things.

“He taught me the rules of various games and explained to me that ‘valid reasons’ existed to understand physical phenomena,” Ron says.

Nature was the Main Entertainment
Since Ron grew up in the late 1940s and 50s, there wasn’t much distraction in the form of technology. No radio and air conditioning meant “there wasn’t much to do besides look up at the stars and the clouds,” he says. His grandfather knew a lot of the constellations, which he pointed out to Ron.

Ron grew up in a time when you raised your own food and he even helped make wine from various plants. Being so close to growing and raising food taught him a lot about science: “There was an implicit scientific understanding involved in all these processes, [picked up] just from working the farm,” he says.

He remembers picking cotton on one occasion in fields that stretched farther than the eye could see. Ron picked cotton for ten minutes before he stopped, and jokes that this experience was more than enough motivation to get a college degree.

Childhood Escapades
As a child, Ron was always getting into trouble, but his childhood experiments allowed him to explore science at an early age. He remembers setting fire to lace curtains using a straw broom to transfer the flame from the fireplace. In addition to using a magnifier to “explode” insects with the help of sunlight, Ron conducted chemical experiments with things he discovered under the kitchen sink and in the tool shed.

The Inner Workings of an Accomplished Professor
Ron is now a professor at Clark Atlanta University in Georgia, where he is the Distinguished Fuller E. Callaway Professor in the Department of Physics. In addition to teaching and mentoring undergraduate and graduate students, Ron is busy serving on various professional and university committees, conducting research, and reviewing scientific and mathematics manuscripts.

As a recognized educator and researcher, Ron collaborates with scientists from all over the world. He is also actively doing research on topics ranging from the history and philosophy of physics to math models of the spread of disease.

Research and the Real-World Applications
One of Ron’s research projects focuses on the SIR model, a mathematical model for predicting the spread of disease. This standard model accounts for people who are susceptible (S), infected (I), or removed (R) from a disease, meaning they have already had the disease and can’t get it again. In real situations, people can remain in the class of infected (I) for a couple of weeks, infinitely, or anywhere in between. Ron is working on how to adjust the model to reflect this changing factor.

His second project deals with oscillations – repetitive motions that occur in a cycle. Vibrating systems that oscillate can be found everywhere. For example, cars with bumpers that are used to reduce the vibrations in car accidents and tall buildings that vibrate because of wind. Vibrations are described by equations that can’t be solved, Ron explains. He’s working on finding methods that can approximate solutions to these equations, which can be useful in real-world applications such as in construction and in the auto industry.

“There’s really no area of physics that doesn’t have real world applications,” Ron explains. Even if it seems like the applications for something aren’t too significant, you still have the satisfaction of dealing with a challenging problem and making progress with it.

When the American Physical Society celebrated its centennial in 1999 in Atlanta, Ron helped prepare posters demonstrating how African Americans have always participated in science and math. They featured scientists like Benjamin Banneker and others, displaying the full spectrum of scientific achievement in the U.S.

Wide Range of Career Options
Ron says, “a physics degree can provide you with opportunities not available for any other science degree.”

Since there technically aren’t any “physics industries” like those featuring chemistry, biology, or engineering in their titles, you can take part in every area of scientific knowledge and creativity. “Plus, you will have a better understanding, compared to other majors, of the fundamental workings of the universe,” he says.

Learning Physics is Simple!
Even though you have to be good at math and know how to apply it, physics is relatively easy to comprehend, Ron says. Large parts of biology and other sciences involve memorization that doesn’t necessarily have to do with the science.

Physics, on the other hand, is straightforward: “Fundamental formulas can be written on a half sheet of paper, and my handwriting isn’t particularly small,” he says. There aren’t too many possibilities in the laws of physics, either. “If you jump off of a building, there’s only one thing that’s going to happen,” he says. “It’s not like poetry, where you can have lots of possibilities and interpretations,” says Ron.

Do What You Love!
Ron is good at what he does because he genuinely enjoys his work. He advises students to not only take pleasure in learning, but to branch out and learn about anything and everything, from science and math to literature and history. Ron urges students to put time and effort into the task at hand, so that they can learn new things from every experience. But most of all, “Love and enjoy what you do,” he says.