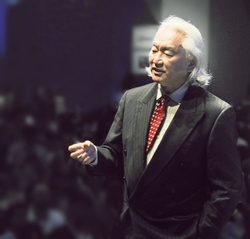 Dreaming of the Impossible
When Michio was growing up, he loved science fiction shows and books, filled with time-traveling heroes, parallel universes, and intergalactic space travel.

"Magic, fantasy, [and] science fiction were all a gigantic playground for my imagination. They began a lifelong love [of] the impossible," Michio says.

So when he grew older and had to put science fiction aside, Michio knew the one place he could cling to the impossible was physics.

"Without a solid background in advanced physics, I would be forever speculating about futuristic technologies without understanding whether or not they were possible. I realized [to know,] I needed to immerse myself in advanced mathematics and learn theoretical physics," Michio says. "So that is what I did."

The day Einstein died, Michio's teachers told his class that the great physicist had died before he completing his biggest discovery- a "theory of everything". Michio was fascinated by this story and unfinished theory, and began going to the library to learn more about Einstein and his work.

Although his family was poor, they whole-heartedly supported Michio’s curiosity, letting him build experiments in the house and taking him to local university libraries. Michio was determined to understand what this incomplete theory was all about.

A 'Smash' Hit
By the time Michio got to high school, he had a well-established passion for physics.

For the science fair, Michio constructed a 2.3eV atom smasher in his garage. This particle accelerator was made of 400 pounds of scrap metal, 22 miles of copper wire, and generated a magnetic field 20,000 times greater than the Earth's.

This ambitious project got him a spot at the National Science Fair. There, it caught nuclear physicist Edward Teller's attention, and earned Michio a full-ride to Harvard University.

String Theory: Finishing what Einstein Started
Einstein spent the last part of his life trying to find a 'theory of everything'- one that could tie together his theory of general relativity and quantum mechanics. These two theories are not fully compatible in our current understanding of physics.

As physicists have picked up where Einstein stopped, one solution they have come up with is string theory. String theory combines the two theories by assuming there are multiple universes and dimensions beyond the ones we know.

More evidence and a better understanding of string theory may one day allow us to travel between universes and into new dimensions, potentially even making time travel possible.

Opening the Doors to the Next Dimension
In addition to making many contributions to the field of theoretical physics and string theory, Michio is also a passionate science communicator.

He has taught at Princeton University and the City College of New York, as well as written seven books on science for the general public. Michio has also appeared on dozens of radio and television shows and documentaries, explaining complex theories in a way everyone can understand.

Physics of the Impossible by Michio Kaku

"Einstein once said, 'If a theory cannot be explained to a child, then the theory is probably worthless'," Michio says. "Meaning that great ideas are pictorial. Great ideas can be explained in the language of pictures. Things that you can see and touch, objects that you can visualize in the mind. That is what science is all about, not memorizing facts and figures."

Consider the Impossible
The very concept of string theory seems to be absurd at first glance. But Michio points out that in the past several centuries, it is the ideas that were labeled 'impossible' and 'ridiculous' that have made all modern scientific advances possible.

"Time and time again, [we've seen] that the study of the impossible has...[pushed] the boundaries of physics and chemistry, forcing scientists to redefine what they mean by 'impossible'," Michio says. "We ignore the impossible at our [expense]."

Find a Role Model
“Try to make contact with real physicists, if possible. Role models are extremely important,” Michio says. “If you cannot talk to a real physicist, read biographies of the giants of physics, to understand their motivation, their career path, the milestones in their career. A role model can help you lay out a career path that is realistic and practical.”

Be Curious
Michio believes it is a natural drive to understand the universe that makes a true physicist.

“People often ask the question: do I have to be an Einstein to become a physicist? The answer is NO,” Michio says. “Sure, physicists have to be proficient in mathematics, but the main thing is to have that curiosity and drive. One of the greatest physicists of all time, Michael Faraday, started out as a penniless, uneducated apprentice, but he was persistent and creative and then went on to revolutionize modern civilization.”