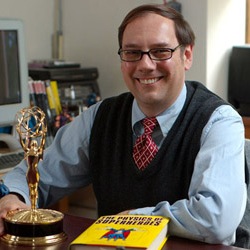 In comic books, James found enjoyment in seeing superheroes use science and creative problem-solving to defeat villains and save the day.

Finding the Right Science Fit
When James was just starting high school, he had started to lose interest in science because he didn’t know if his abilities were good enough to pursue a career in science. Initially, James’s high school math teacher inspired him to consider a career in patent law.

While looking through the classes that he would need in college, James realized that he was more interested in the engineering classes than the pre-law classes and so he majored in engineering.

But, after working in a physics lab, James came to like physics more and so he changed his major to physics.

Mild Mannered Bespectacled Professor By Day
James teaches and does research when he’s not consulting for movies. At the University of Minnesota, James has developed a research program in experimental condensed matter physics with projects ranging from nanomolecules to applications in neuroscience to solar cells.

More importantly, much of his research is interdisciplinary as he works with mechanical engineers, biomedical engineers, and neuroscientists.
Cape-Wearing Science Consultant By Night
As Hollywood comes out with more science fiction movies and superhero movies, many directors have opted for more accurate movies featuring real science knowledge which requires consulting actual scientists. James is one of those scientists and he has consulted for Watchmen and Green Lantern.

The real science knowledge that he provides has made these movies much more scientifically correct and may help attract more of the younger generations into the field of physics. In addition to giving accurate science language and details, James also gives some science insight to the design teams when it comes to the visual effects.

Some of James’s scientific contributions to science fiction movies may seem like small details, but these small details keep the audience engaged and may even get them interested in some real science.

The Superhero of Physics
James always wanted to somehow merge physics and comics to make physics more accessible to people of all ages. With the freshman seminar – Everything I Know About Science I Learned from Reading Comic Books – that he created, James has managed to make physics more interesting and easier to understand for students who might only take one physics class in their entire academic career.

Bringing Comics to the Classroom: Interview with James Kakalios

“The most important thing is getting the students to ask the right kinds of questions. If a character has wings on her back, what important physical forces and issues do we need to consider if she’s going to use them to fly? What kind of wingspan and muscle structure would that require? Hopefully, pointing out issues like these will help students think critically in other situations,” says James.

James has also written two books on the physics in comic books. He uses comic books to explore the basic laws of physics and brings science to a younger audience. James also wrote a third book about what roles quantum physics plays in our daily lives. All of James’s books are written in an accessible language that allows anyone and everyone to get a little bit of physics knowledge and learn some interesting things in physics.

The Physics of Superheroes & Spectacular Second Edition by James Kakalios

Not only does James believe that he can spark an interest in science within students, but he also believes that the general public also has a genuine interest in science. With about 1.7 million views for his YouTube video that talks about the science in Watchmen, James is sure that the public is interested in learning about science phenomena.

Keep Up With Science & Technology
“I want to get physics across to people who only plan to take one physics class – because they’re going to be voters, and we live in a technological age. We’re being called upon more and more to have opinions on scientific and technological points, and you don’t want to be at the mercy of all these ‘experts.’ Some of them are right, and some are just bloviating,” says James.

The World is a Scientist’s Playground
James’s search for science in comic books and consultations for science fiction movies shows that science can be found practically anywhere. It can be found in art, movies, and things we encounter everyday. With science having applications in many different things, there’s bound to be something that will interest you and will have a scientific explanation behind it.