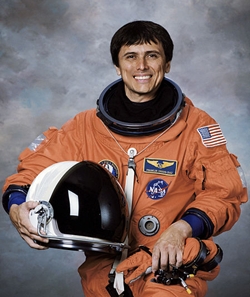 Star-struck
Franklin was born in 1950 in Costa Rica to a part-Chinese father and Costa Rican mother. Raised in the Cold War era, Franklin was captivated by the Soviet Union’s Sputnik satellite and the beginnings of space exploration.

“I felt one day humans would travel to distant planets, and I wanted to be one of those travelers…I spent my afternoons imagining I had my own rocket ship. I would invite my cousins and my friends to join my crew, and we would lie on our backs inside a very large cardboard box and go through a countdown, and blast off,” Franklin says.

“That was the beginning- my earliest memories of being fascinated by space.”

Eyes on the Prize
While Franklin was convinced he wanted to be an astronaut, growing up in the 60’s he knew he needed to come to the US to pursue a science education and the training needed to achieve his dream.

“My family never prevented me from doing that, but they couldn't really help me,” Franklin says. “We were not a well-to-do family…my parents were not rich. Neither one of them finished college. But I was expected to have a college education. I was expected to reach very high.”

So after completing high school in Costa Rica, Franklin immigrated to the US and started high school all over again. Due to his English language barrier, Franklin failed his classes for the first two quarters, but soon began to excel.

One of Franklin’s teachers took notice of his story and situation and became his mentor, coaching him in English and preparing him for college. The result of his hard work was a full ride to the University of Connecticut for engineering.

The Mistake
When Franklin enrolled for the fall however, he received some shocking news. “They said they made a mistake…they told me, ‘you deserve this scholarship, but you are not a US citizen. We thought that you were from Puerto Rico, not Costa Rica.’”

Panicked, Franklin told his high school teachers, who immediately wrote a petition to convince the Connecticut legislature to reverse their decision. The result was a one-year scholarship and in-state tuition rates. To pay the rest, Franklin took out loans and worked in the university physics department, where he became more familiar with the subject. Franklin graduated with a degree in mechanical engineering.

Setbacks Become Opportunities
Not long after the first man landed on the moon in 1969, NASA was forced to cancel its Apollo space flight program due to lack of funding. Discouraged but not deterred, Franklin used the opportunity to study physics and nuclear energy at MIT, earning his PhD in Plasma Physics.

Plasma is a special form of gas that can conduct electricity and be controlled by electromagnetic fields. You can see plasma in objects like neon lights, and, in nature, lightning. Franklin felt this field held the future of rocket fuel.

His Golden Ticket
In 1977, the Space Program returned, and Franklin saw his chance. He applied for astronaut recruitment with engineering and physics degrees under his belt, and his background and credentials won him a spot.

“After I got that call, I went running out the door and across the street—I almost got run over by a cab,” Franklin says. “My life changed completely from that day on.”

Franklin went on to participate in seven Space Shuttle missions over the next two decades. Franklin also became one of the first scientists without a military background to regularly fly on board.

“When I first started, it was clear that being a scientist made you less likely to fly. But that didn't seem right to me,” Franklin says. “Throughout my years in the astronaut corps, I think I helped bridge that gap. Obviously, both parts of the personality are important—having military discipline is just as important as having an inquisitive, formally trained, scientific mind. What I've done is prove that those qualities can fit together in one person.”

Looking Ahead
After retiring from NASA in 2005, Franklin started his own company, the Ad Astra Rocket Company. Ad Astra is using plasma physics to bring advanced rocket technology to life, and has developed the Variable Specific Impulse Magnetoplasma Rocket (VASIMR).

“Chemical rockets, the conventional rockets that we have been using all along, really don't give us the capability to travel far,” Franklin says.

“I believe that the VASIMR will revolutionize space travel. Right now, every satellite that we launch into space goes on a one-way trip…once it runs out of fuel, that satellite is dead. The VASIMR engine will make it so that we have round-trip capability. It also provides a great increase in the amount of impulse we can get from an engine…Eventually, we'll be able to say, ‘Today, I'm going to go visit the moons of Jupiter, and I will be back in a couple of months.’ We'll be able to do everything within a reasonable time frame.”

Back on earth, Franklin is also an active environmental advocate, encouraging students in the US and Costa Rica to get involved in protecting the environment for future generations.

Don’t Let Boundaries Hold You Back
“I think people—young people—here in Costa Rica, and maybe in other places as well, can relate to my story because I wasn't privileged. I didn't have any advantages, other than a wonderful set of parents and a wonderful infrastructure of people who helped. I didn't come into the world as a rich person. I didn't have special connections. I wasn't even born in the right country. So if I can do it, anybody can.”

Franklin believes that students shouldn’t be discouraged by financial or cultural barriers when pursuing their dreams and interests. He encourages them to look out for potential mentors and grab the opportunities around them in the face of obstacles.

Think About the Future
Franklin’s life and work, whether in space travel or the environment, is directed towards securing a better future for humanity. He believes in thinking about how our lives can impact of those long after us.

“My dream or my vision is a future for humanity where we will be completely free to pursue activities outside of our planet. The Earth will then become sort of humanity's national park, a protected area where our children and their children can all come back and know and enjoy the beauty of where their ancestors came from.”