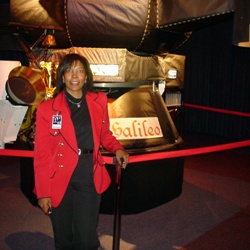 The End of a Dream
Claudia had a lot of different hobbies and interests as a child. She was especially interested in writing and she hoped to be a journalist.

“But my parents were convinced engineering was the answer,” Claudia said. With both of her parents being engineers and their desire for her to study something “useful” in their opinion, Claudia’s days of journalism dreams were over.

An Internship Leads to a New Interest
While she was still in high school, Claudia got a summer internship in the engineering department at NASA’s Ames Research Center.

While her parents hoped that she’d become an engineer, Claudia wasn’t so interested in engineering. In fact, she hated engineering. “I found it was a lot more fun to think about the flow of water in a river than water in the city sewer, so I went into earth-science and got a bachelor’s in geophysics at UC-Berkeley,” Claudia said.

The Everyday Scientist
“I’m not a brilliant white-coated Jimmy Neutron trapped in a lab,” Claudia said. She considered herself to be “pretty much a normal person who’s doing science.”

Claudia’s internship at NASA’s Ames Research Center was only the beginning of her extensive career with NASA. After completing her graduate studies, Claudia started working at NASA’s Jet Propulsion Laboratory where she contributed to many different missions and showed her expertise in areas such as studying comets and understanding solar wind.

“I love working in the space program on one-of-a-kind engineering applications, like flying spacecraft, which is really a team effort. There are so many aspects of keeping a piece of engineering working and operating when it’s thousand of kilometers away from you. The ingenuity required is amazing,” Claudia said.

Becoming a Leader in Space Science
“I feel like a modern-day explorer; the last frontier is space,” Claudia said. From journalism dreams to a project scientist at NASA’s Jet Propulsion Laboratory, Claudia established herself as a distinguished expert in space science and an intelligent leader of space projects.

When Claudia first entered the Jet Propulsion Laboratory, she worked as the science coordinator for the plasma instrument on the Galileo spacecraft. But, it wasn’t too long before Claudia became the project manager of the Galileo mission where the goal was to make the first study of Jupiter and its moons and magnetosphere from orbit.

After the successful completion of the Galileo mission, Claudia became the project scientist of the Rosetta mission where she got to work with NASA’s European counterpart, the European Space Agency. She enjoyed being able to represent NASA and the United States on a European mission. The Rosetta mission aims to make a detailed study of a comet and is the first mission designed to orbit and land on a comet.

As a project scientist, Claudia relied on her physics knowledge and interdisciplinary experience to lead a team of scientists and successfully complete missions. Claudia also used her skills to understand the science of the many different instruments used in space missions and to make vital science decisions about observations of various science targets such as comets and asteroids.

Real Work Experience Makes a Difference
“My internship showed I was capable of doing the job at NASA, and that was important as a minority. I showed that I could do the job very well, and I had good success doing what was technically required,” Claudia said. Getting the chance to work for NASA early on gave Claudia an opportunity to demonstrate her skills and genuine desire to learn more about planetary science.

A Good Scientist is Well-Rounded
“The job has a technical component, so you need to know the science, but you must have interpersonal skills – a special concern for people. Don’t neglect those skills. The ability to argue, to think on your feet all help downstream. It’s not just the technical skills that will allow you to get the cool jobs,” Claudia said.

Science is Rewarding
“In the annals of history the athletes and musicians fade, but the ones who make fundamental improvements in humankind’s way of life, and in their understanding of the Universe, live on in their discoveries,” Claudia said.

While science can be tough and time-consuming, Claudia pointed out that every job requires hard work and dedication to be successful as well. But, Claudia showed that the main reward of science is that it affects many people and not every job can do that.