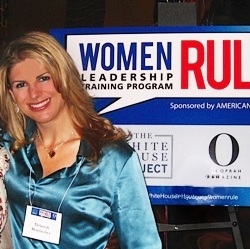 Rediscovering a Childhood Love
Growing up in Mexico City, Mexico, Debbie was filled with a natural curiosity about the world and dreamed of being an astronaut.

Unfortunately, she grew up in a conservative community that strongly discouraged girls from pursuing careers in science. So Debbie let go of dreams of science and focused on more socially acceptable pursuits, such as theater and writing.

Debbie continued to work hard in school however and received a scholarship to come to the US to study philosophy at Brandeis University. Part of her coursework included an intro-level astronomy course, which she immediately fell in love with.

Debbie soon befriended the astronomy class’s teaching assistant, Roopesh. Roopesh was willing to spend hours outside of lecture answering Debbie’s many questions about the universe and the stars.

Several years into her college education and under the pressure of her family’s expectations however, Debbie did not have the courage to pursue her interest any further.

Breaking Point
Her senior year, during one of her talks with Roopesh, Debbie broke down. She told Roopesh she couldn’t live with herself without having tried to study physics, but that her scholarship would run out before she had the chance.

Roopesh went and spoke to the advisor of Brandeis’ Physics department. He informed Debbie he would allow her to skip the first two years of physics majors’ requirements if she could independently learn the material in one summer.

Debbie, who barely remembered algebra, was intimidated but determined to try. With Roopesh as her mentor, she studied math and physics for nearly 12 hours every day. She successfully caught up and was able to finish her physics degree before her scholarship ended.

Taking Over Wall Street
What does physics have to do with business and investments? Creating the mathematical models that will assess the risk of investments worth millions, that’s what.

And that’s exactly what Debbie does every day.

After becoming the first Mexican woman to graduate from Stanford University with a physics PhD, and completing two post-doctoral research positions, Debbie decided that she wanted a life outside of academia and research.

She took her smarts to Wall Street and became a quantitative risk analyst. Now, as Vice President of Risk Analytics at Morgan Stanley, Debbie uses math models and quantitative analysis, like in statistics, to determine and manage the financial risk of investments. She trains her clients to use these math models, customizing solutions for their needs.

Inspiring Students: The “Oprah” of Science
Debbie’s first love, however, is still science.

Inspired by the support she received from mentors like Roopesh and her own background, Debbie is now an advocate for women looking to enter scientific careers.

“I would love to become a female role model for those girls who love science but somehow feel trapped, like they can’t achieve their dreams,” Debbie says. “I have worked my whole life to acquire the knowledge and skills to communicate science in a fun and relevant way. I want to become the new ‘Oprah’ of science.”

Debbie gives talks and science demonstrations, visits elementary and middle schools, and has her own website called “Science with Debbie”. There, she has a science-themed blog and a video series called “The Science of Everyday Life”. Episodes look at everything from the science of high-heels to time-reversal of waves. Debbie has also hosted National Geographic’s Humanly Impossible, a show looking at spectacular human stunts and why they are scientifically possible.

The Science of Everyday Life

With her background in both science and humanities, Debbie is a new type of physicist- one that can understand what it’s like to not understand science and can deliver science to people with different interests and backgrounds.

Don’t Give Up
Debbie’s culture, family, and financial situation made physics seem like an impossible choice, but Debbie knew physics was what she truly loved and wanted to do. Even as late as her senior year of college, Debbie went from no science experience to a physics PhD. She believes others can do the same.

“When people hear what I do, they – especially teenage girls – feel intimidated.  But when they hear my whole story, their tune changes.  I tell them that I know what it is like to not understand something.  I was not the kind of person where my comprehension of science came naturally,” Debbie says.  “But I did it. And if I can do it, anyone can do it!  My story can be inspirational to someone who comes from a background completely lacking in science because they, like me, can reach their goal.”

Physics Can Take You Anywhere
Debbie wants students everywhere to know that having a degree in science or math does not limit you to research or teaching in academia. In fact, she likes to point out those career positions are limited. While many physicists still pursue careers in academia, Debbie is one of the many who have gone on to other exciting careers that use their physics knowledge.

“There are over one thousand physicists and mathematicians on Wall Street,” says Debbie.