Coasters, G-Force and Velocity, Oh My! 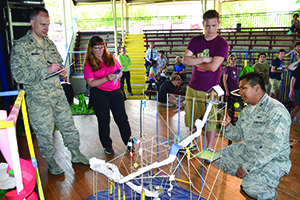 Depending on your taste, roller coasters are the best — or worst — ride in an amusement park. Steadily climbing the steep slope ahead, and your stomach in knots, you might wonder: Is the barometric pressure increasing or decreasing? Or how much is the total g-force going to change once I hurdle over the first drop?

Not everyone will be thinking this, but kids who attended the annual Physics Day at Six Flags America had to answer these questions during countless thrill rides. The park closed its doors to the public on April 28 for the private event, which drew in hundreds of high school physics students from Northern Virginia, Maryland, and the D.C. area.

While many students were spotted walking around with pens, paper, and calculators in hand, others darted toward the staffed stations outside thrill rides to strap on accelerometers. With the help of APS volunteers, students were able to track the change in barometric pressure (coinciding with their change in altitude during the ride), along with a measurement of the g-forces acting on them. The best part: The results were graphed from start to finish of the ride, and were printed off as a souvenir for the kids.

"We’ve been learning a little bit about g-force in class," said a group of students from Springbrook High School in Silver Spring, Maryland. "It's helping us a ton that we apply what our teacher is talking about in real life … and maybe this type of question will be on our next test?" 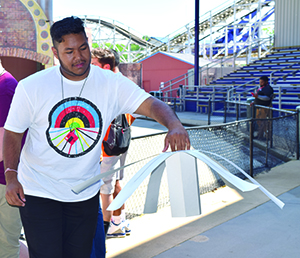 To get more students involved in the all-day event, Becky Thompson, Head of APS Public Outreach, emceed the popular egg-drop contest, where teams of students had to build a homemade container to keep the egg from cracking. Their eggs had to survive a drop of 50 feet at the park’s Gotham City Arena.

"We made a new rule that students couldn’t use parachutes to help in the contest," Thompson explained to APS News. "I thought they couldn’t beat it, but all [of the students] impressed me."

The winner of the prize, a boy named Chris from Northwood High School in Silver Spring, Maryland, strapped his egg inside of a pinwheel-like paper tube. "I thought of the mechanisms of a falling maple leaf when making my container," said Chris. "I honestly had no idea I was going to win a prize … but I’m super excited that I learned new physics in the competition."

The winners of all the contests, including the build-your own-roller coaster challenge, were given a season pass to Six Flags America. The roller coaster challenge tested the minds of students to make their own realistic and thrill-filled ride that would safely transport a marble from start to finish. Each setup, made from all kinds of household materials, included a unique theme. The winner of this year's contest sent marbles through loops, twists, and turns along the "Millbrook High" Rollercoaster — equipped with a goal post, the Millbrook mascot, and a replica of the Millbrook High School Building as the starting point of their ride.

"We judge the designs based on theme, the quality of realistic features you would see on an actual roller coaster, and whether or not you would find the ride to be 'safe'," said one of the judges, who volunteered from the Six Flags America park and the U.S. Air Force. "We also like to give extra points to the groups who can pull off vertical loops, without the marble falling off."

As an annual event, Thompson and the other coordinators of the event strive to make Physics Day bigger and better than the last. "We had 30% more egg drop entries and 20% more roller coaster building competitors compared to last years event," Thompson exclaimed. "This year was a great success, and I love that we've 'upgraded' our accelerometer equipment to cell phones, instead of the bulky vests that we used in previous years."