A universal model for solar explosions, five new baryons, and more in our monthly wrap-up of papers from the physics literature.

Explosions from the Sun's surface come in all shapes and sizes, but new simulations suggest a common origin of two different types of eruption. Coronal mass ejections are attributed to a kink or other instability that pushes blobs of plasma outward, while leaving nearby magnetic field lines unbroken. Coronal jets, on the other hand, are assumed to result from magnetic reconnection, a highly energetic event that occurs when field lines are stretched to the breaking point and then snap into a new configuration. Observational data have hinted that coronal jets may in fact be miniature versions of coronal mass ejections. If so, it is still unclear whether the root cause is a plasma instability or reconnection. As reported in Nature, Wyper et al. carried out high-spatial-resolution 3D simulations of a coronal jet to resolve this question. The simulations revealed that the jet's energy release involves "magnetic breakout," a positive-feedback mechanism in which reconnection weakens the fields holding back the plasma eruption, which in turn amplifies the reconnection. Breakout can occur over a wide range of spatial scales, which points to reconnection as the origin of both coronal mass ejections and jets.

Five New Particles in One Go 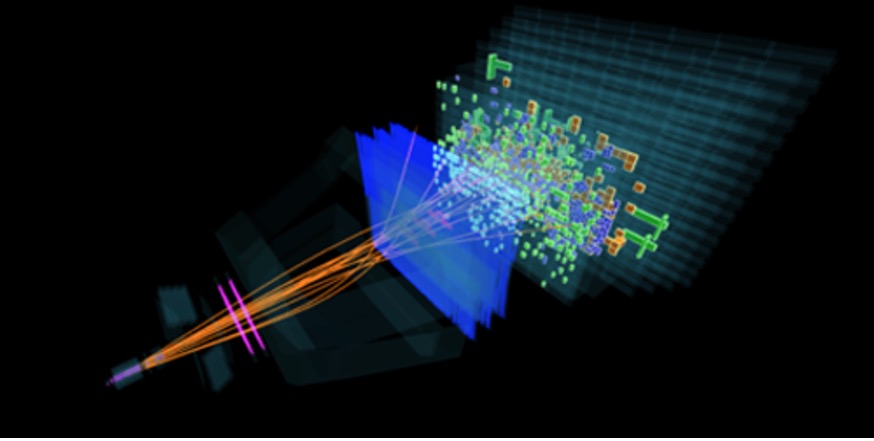 The Large Hadron Collider beauty experiment (LHCb) has discovered a collection of five new baryons. The newly discovered particles are excited states of the Omega-c-zero (Ωc0)—a baryon made up of one charm quark and two strange quarks. The existence of these particles was expected since the Ωc0 was discovered in 1994, and researchers previously attempted to produce them in high-energy particle collisions. But the low production rate of the particles and their complex decay modes made them hard to observe. As reported in Physical Review Letters, LHCb succeeded in seeing the states thanks to the analysis of large datasets from LHC's first two runs and to the ability of LHCb's detectors to distinguish different products of the baryons' decays. The collaboration next intends to measure the particles' spin and parity. Such information will help researchers establish whether the five states are standard baryons or more exotic states like pentaquarks. The results may guide researchers toward refined theories of the strong interaction that binds quarks together. (For more, see the Synopsis in Physics "Five Charming New Baryons".)

Cooling Off by Putting the Pressure On 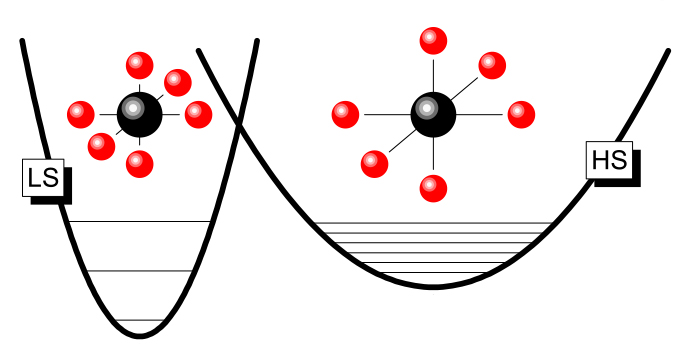 Efficient and environmentally friendly solid refrigerants might soon be poised to replace chlorofluorocarbons in cooling devices. According to work published in Applied Physics Letters by Pedro Jorge von Ranke, a class of materials called spin-crossover systems should exhibit pressure-induced entropy changes of a magnitude sufficient to work in a practical cooling cycle. In the past, researchers have studied many different solid refrigerants that respond to magnetic fields (the magnetocaloric effect) but they required very high field strengths to achieve useful cooling. Pressure-driven materials have drawn interest following the discovery of a giant barocaloric effect in ammonium sulphate, and more recently, in spin-crossover systems. In the latter, pressure induces a transition from a low-spin state to a high-spin state, which is accompanied by a large change in entropy. Von Ranke studied an iron-based chlorophenyl sulfonate spin-crossover compound using an Ising-like microscopic model and found that for a pressure change from 1 bar to 4.1 kbar, the compound had a theoretical refrigerant capacity of 2160 joules per mole. This is a factor of six higher than the magnetocaloric materials and points to spin-crossover systems as promising compounds for room-temperature solid-state refrigeration. 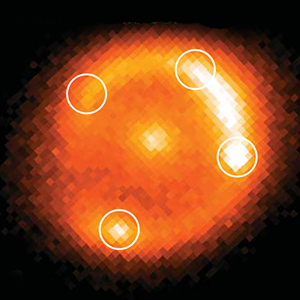 Lensing of a supernova

When a distant star went boom last summer, astronomers got not one but four views of the fireworks. The multiple images, published by Goobar et al. in Science resulted from gravity bending the path of the exploding star's light — marking the first time that this so-called strong gravitational lensing has been observed for a supernova. The event was picked up by the intermediate Palomar Transient Factory (iPTF) — a large sky survey based at the Mount Palomar Observatory in California. On the night of September 5, 2016, the iPTF team detected a bright spot that they christened "iPTF16geu." Follow-up observations revealed that the light originated from a type 1a supernova located 5 billion light years away. However, the explosion appeared brighter than expected, implying that the gravitational lensing of a galaxy between us and the supernova had magnified the light. High-resolution images uncovered four spots all coming from the same supernova. This gravitational lensing offers a unique opportunity to probe the distribution of matter in the foreground galaxy. In particular, the relative brightness of the different images suggests substructures, or clumps, in the galaxy's architecture.

Snapshots with a Hotspot 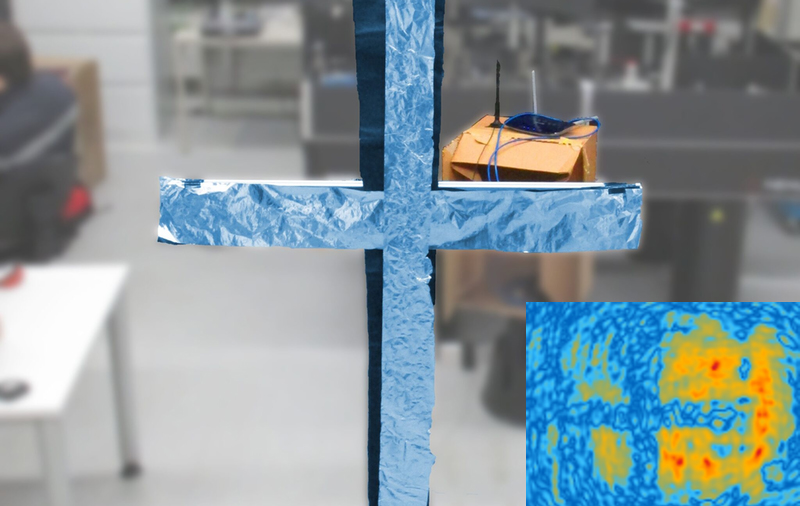 The signals emitted by a commercial Wi-Fi router can act as a kind of radar, providing images of the transmitter's environment, according to results published in Physical Review Letters. It’s not a new idea, but previous attempts at Wi-Fi imaging have needed specially adapted systems: either short pulses of ultrawideband signals or highly directional Wi-Fi beams from which images are reconstructed based on the angle of the signal's arrival. Now Holl and Reinhard have found a way to implement Wi-Fi imaging using a standard, commercial Wi-Fi router, or "hotspot," despite its narrow bandwidth. The trick was to use all of the Wi-Fi signal that reaches a detector, rather than discarding some of the data, as previous methods have done. The authors analyzed the two-dimensional Wi-Fi wave front as though it were a hologram — a 2D encoding of a 3D image. They placed a 1-meter-wide metal cross nearby and the resulting image revealed the clear outline of the cross. To demonstrate the potential of the approach on a larger scale, Holl and Reinhard carried out a computer simulation of the Wi-Fi signal they would detect from a small building and reconstructed a series of 2D slices of the virtual building. (For more, see the Focus article in Physics, "Imaging with Your Wi-Fi Hotspot".