Mika McKinnon was pursuing a master’s degree in geophysics at the University of British Columbia when a mysterious email began to bounce around her department. It seemed that the producers of Stargate: Atlantis, a sci-fi television show being filmed in nearby Vancouver, needed some sci-fact assistance. They were hoping to tap the brain of a string theorist to ensure that they got the science right on the series.

“I wasn’t a string theorist, but I found out later that they’d requested one because they thought a string theorist was the smartest scientist ever,” she recalls “I called them up and pitched myself: ‘You need a creative scientist, plus I’m a huge fan and know the context.’”

They gave McKinnon her shot. The props department tasked her with explaining how a solar flare would interact with a black hole for a time-travel episode. McKinnon needed to write the equations out on a series of whiteboards for a scene in which the actors on the series would discuss the equations and fill in the missing variables. “My job was to create real equations to support their plot lines,” she says.

McKinnon’s value was quickly noticed, and soon she was tapped by the visual effects and set decoration departments, and later the writers. One gig turned into another and another. “I was creating plausible extensions of real science to support the fictional plots,” she says. One project involved helping the writers of an episode come up with something in space that needs to kill everyone every 22 minutes. “They wanted a pulsar,” she explains. “But the problem with having this as the big baddy is that it doesn’t produce enough electromagnetic radiation to do so. So my solution was a pair of stars—a pulsar and feeder star. It was a small background detail and literally changed one sentence in the script. But it was enough to change the impossible to the plausible.”

By the time she finished her graduate degree in 2010, she had freelanced for both Stargate: Atlantis and its next iteration, Stargate: Universe for a total of five seasons over three years. Today, she runs a diversified business that includes projects in science entertainment consulting and science communications, including a great deal of science journalism. Her freelance entertainment work is varied—she has written briefs about scientific topics that end up in scripts, helped set decorators put the right scientific touches in the background of shots, and even rented out her physics textbooks for a film with George Clooney. “I asked to have his autograph as my fee, but I failed and they paid me instead,” she says with a laugh.

Right now almost all the entertainment work she is doing is related to pilots, the shows that could end up as the first episode of a series. “I love that you get a chance to set the science for an entire universe,” she says. “When I’m doing pilots, it’s very conceptual. If the writers are thinking of doing a post-apocalyptic dystopia set in the desert, they are asking ‘what kind of science would be useful to know?’ I teach them about desert ecology, cave geology, and technology in the boonielands, and get them started on the basic scientific framework.”

Although it’s a frustrating fact that a lot of pilots don’t get made into a series, there is another especially gratifying aspect to her work: She gets to go to sci-fi conventions and promote the projects. For example, she has appeared on panels at Dragon Con, one of the largest science fiction and gaming conferences in North America, attended annually by almost 80,000 nerds and geeks. “Having scientists on shows adds credibility to your plot line,” she says. “When I go to Dragon Con and speak about it, I am competing against people with star power and yet I get rooms filled with people who are excited about the science.”

McKinnon, who calls herself a Master of Disaster, also works as a hazards-assessment geophysicist. She has done several projects for Natural Resources Canada (NRCan), and recently completed a multi-year contract working as a research analyst for the U.S. Federal Emergency Management Authority (FEMA), studying disaster preparedness and response. “We can use science to update how we respond to disasters and how emergency managers plan for disasters to increase the chance of saving human lives,” she says. “It is both a depressing and rewarding job. It is always hard to work on this type of assignment when you know that you can’t address everything in advance. But it’s rewarding because if you can make things incrementally better, fewer people will die in a disaster.”

Her next geophysics gig is as a co-investigator on NASA Project ESPRESSO (Exploration in Science Pathfinder Research for Enhancing Solar System Observations). McKinnon will be modeling landslides on asteroids. “It's the same family of work I've done before for NRCan and FEMA, but in space! I'm very excited. This will allow us to do better hazard evaluation during robotic exploration or even asteroid mining.”

McKinnon hopes to continue her entertainment consulting enterprise. In the last year, she worked on seven pilots, as well as several movies. Confidentiality agreements are commonplace, so she is not allowed to share what shows or movies she is involved in until they are released. And because of extreme secrecy, sometimes even she doesn’t know what project she is working on at that moment. But she doesn’t mind, as she finds the mystery of not knowing entertaining in and of itself.

A few years ago, a production company reached out to her in the early stages of a project that was yet to be named to ask her about how tornados operate. She prepared a brief on the subject, and then one production cycle later, Sharknado, a made-for-tv movie in which a monstrous storm devastates Los Angeles, leaving the streets flooded and infested with sharks, premiered. McKinnon noted that it was the only film associated with tornados from that production company. “I may or may have not been a consultant for Sharknado, she says. 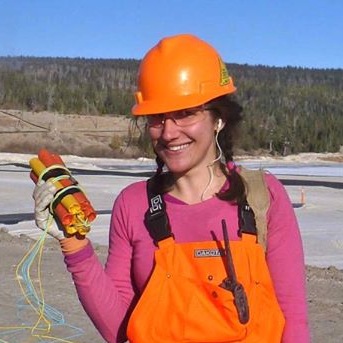